Government plan for public consultation on auto-enrolment a ‘deflectionary tactic’ 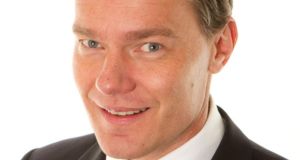 Tommy Nielsen, chairman of the Association of Pension Trustees in Ireland: Complexity, he argues, is a defence for paralysis at the Department of Social Protection

Consultation on the proposed introduction of mandatory pension savings in Ireland misses the point: what is needed is simplification of Irish pension structures. At least that’s the view of Ireland’s pension trustees.

The Government is preparing to launch a public consultation on how best to introduce auto-enrolment to ensure Irish workers have an adequate pension in retirement. Less than half of private-sector employees currently have occupational pension cover.

Tommy Nielsen, chairman of the Association of Pension Trustees in Ireland, and legal officer at Independent Trustee Company, says the proposed consultation is “another tactic to deflect from what really needs to be done”. That, it says, is simplification of the system, which it claims does not appear to be high on the agenda.

Mr Nielsen argues that the current system – specifically the personal retirement savings accounts (PRSAs) introduced in 2002 – can accommodate auto-enrolment, simply by making contributions to them compulsory.

Focusing on yet another new layer of pensions, Mr Nielsen says, will simply means less focus on the most important question about auto-enrolment: who is going to pay for it?

Complexity, he argues, has become a defence for paralysis at the Department of Social Protection for 16 years.

The trustees say there are now 13-15 pension vehicles, where only one or two are needed. “With a bit of courage, pensions simplification could be simple,” says Mr Nielsen.

Aside from the use of PRSAs as the vehicle for auto-enrolment, he is urging the Government to transfer unregulated pension buyout bonds into PRSAs and to end the practice whereby occupational pensions, including PRSAs, must be transferred to an entirely separate Approved Retirement Fund for payment – unless they are being paid out via an annuity.

The representative group, which is a strong proponent of small, self-administered pensions, also wants to eliminate personal pensions – used by the self-employed and those unable to join an occupational scheme. Mr Nielsen says these are expensive, with little consumer protection.

“The important thing is that personal pensions do not have any particular qualities which PRSAs do not have. To keep them is an unnecessary doubling up.” he says.

The APTI chairman suggests the creation of master trusts, into which large numbers of small employer occupational pensions are placed. These are already in place in the UK and have the advantage of lower running costs for each of the smaller schemes and an end to the proliferation of small schemes that has been identified by Government as a concern.

“No minister for social protection with a minimum concern for the welfare of pensioners would allow the current, bizarre pensions landscape to persist,” he said.

1 Son putting elderly dad under pressure to sign over land
2 BOI customers to be charged twice with bank fees on New Year’s Eve
3 Family in court dispute over hotels in Dublin and Galway
4 How to gift your child a house deposit . . . tax free
5 Running to go backwards: The problem with productivity apps
6 Ryanair warns it may reduce more Irish services and relocate operations
7 Stripe in talks for new funding at much higher valuation
8 CRH eyes return to acquisitions and mergers in 2021
9 Greencore business ‘absolutely smashed’ by Covid-19, says CEO
10 City of London makes late scramble to limit Brexit disruption
Real news has value SUBSCRIBE
Save money on international transfers