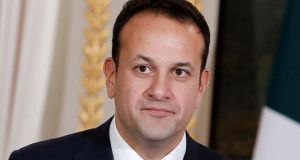 The Government has sought to keep the focus firmly on the OCED as the way of combating international tax avoidance in the wake of the Paradise Papers revelations.

The Government favours the OECD process as a bulwark against attempts by the European Commission and some EU member states, notably the French, to introduce new EU rules that would tax digital revenues and potentially endanger Irish corporation tax receipts from technology multinationals.

He sought to draw a firm distinction between the forthcoming EU proposals on catching the revenues of tech multinationals and the revelations of widespread tax avoidance by rich individuals and companies in the Paradise Papers.

“There’s two key policy points for Ireland here,” Mr Varadkar said. “First of all we believe in tax sovereignty. Nation states set their taxes to fund national budgets - national taxes for national budgets. That’s what we want. We also want transparency too. We’re signed up fully to the OECD process. So yes, we’re for tax transparency, but we’re also for tax sovereignty. That means us setting our tax rates and not other countries,” he said.

“We will absolutely support tax transparency internationally and we’ll do that through the OECD and at the same time at the European level we will absolutely defend our tax sovereignty,” Mr Varadkar added.

The Taoiseach said he understood that both AIB and Bank of Ireland had closed international subsidiaries that were named in the Paradise papers but added: “Obviously this is a story that’s evolving and we’ll keep close attention to it.”

Speaking in Brussels, where he is attending a meeting of EU finance ministers, Mr Donohoe also highlighted the OECD process, saying that Ireland was “in the forefront of implementing the OECD approach.”

However, opposition parties criticised the Government’s response to the revelations.

“Banking secrecy has to end, the Sinn Fein MEP Matt Carthy said in a statement. “Leo Varadkar’s comments that tax-dodging needs to be left to the OECD is just not good enough, and it reveals his ignorance on this matter.”

He said that Irish banks should not be able to hide the ownership of accounts in offshore companies.

The People Before Profit TD Richard Boyd-Barrett said that the publication of the papers “confirmed the continuing and longstanding failure of Irish governments to clampdown on rampant tax dodging by the Irish rich and bog corporations.”

“This rotten culture goes back to Ansbacher,” he said

Mr Boyd-Barrett said that all passport holders and accountancy and financial consultants should have to provide an annual declaration of offshore deposits to the Revenue Commissioners. “We need a massive database of wealth,” he said.

‘Evidence of a rotten system’

Christian Aid Ireland described the leaked documents, which centre around the offshore law firm Appleby, as “further evidence of a rotten system” designed to “entrench wealth and privilege in the hands of a few”.

The charity called on the Government to introduce a publicly accessible register to ensure transparency around companies’ tax obligations. While the State recently committed to introducing a register as part of the EU anti-money laundering directive, it has refused to make it public.

“This is not the first leak of this nature and it won’t be the last,” said Sorley McCaughey, head of advocacy and policy at Christian Aid Ireland. “It is clear that transparency is now inevitable. Whether by design or by leakage, nobody can expect to keep the details of their tax affairs secret anymore.”

Mr McCaughey warned against focusing on celebrity involvement in the scandal for fear of losing sight of the long-term effects on the world’s poorest countries.

“The impact of tax evasion and avoidance in poorer countries can be far harsher. Even a few million dollars, let alone the billions that seem to be involved, can make the difference between life and death, and the lack of government funds for investment holds back economic development and maintains the dependency on aid.”

Oxfam also called for the Government to implement EU proposed reforms including the creation of a “blacklist” of non-tax compliant countries.

“We can’t just shrug our shoulders and accept this as a part of international commerce,” said Oxfam chief executive Jim Clarken. “Ireland now has the opportunity to show leadership by supporting EU proposals aimed at fighting this type of tax evasion. This is especially important considering that our own country’s tax arrangements have been implicated as facilitating some of these nefarious practices.”

Rather than sidestepping Irish involvement in the latest tax revelations by referring to the Paradise Papers as an “international problem”, Government officials should join the global response to these hidden offshore accounts, he added.

June Tinsley from Barnardos said tax avoidance in Ireland had contributed directly to the rise of child poverty in the last decade and that the shortfall in tax revenue had increased austerity cutbacks and “shoved the burden onto those who can least afford to pay”.

“The Government has been quick to clamp down on social welfare fraud; but seems less keen to tackle those who take billions of euros out of our tax net,”said Ms Tinsley. “The real losers of tax avoidance are Irish children whose futures are being sacrificed.”

In the UK, Labour leader Jeremy Corbyn said the Queen’s tax affairs should be included in his party’s inquiry into tax avoidance. Asked if the Queen should apologise for the millions of pounds her private estate invested in a Cayman Islands fund, Mr Corbyn said any person avoiding taxation in Britain should do two things - “not just apologise for it but also recognise what it does to our society.”

“If a very wealthy person wants to avoid taxation in Britain, and therefore put money into a tax haven somewhere, who loses?” said Mr Corbyn. “Schools, hospitals, housing, all those public services lose and the rest of the population has to pay to cover up the deficit created by that.”

A spokesman later said Mr Corbyn had not called for the Queen to apologise and that his comments were aimed more broadly.

Meanwhile, Theresa May refused to commit to a public register of the ownership of offshore companies and said new measures introduced by her predecessor, David Cameron, were already creating more transparency.

In the United States, Donald Trump’s commerce secretary Wilbur Ross said there was “nothing improper” about his business links to Russian figures currently under US sanctions. The Paradise Papers revealed that Mr Ross had a stake in a shipping company that has received more than €68 million in revenue since 2014 from a Russian energy company co-owned by the son-in-law of Russian president Vladimir Putin.

Mr Ross told the BBC that there was “nothing whatsoever improper” about his links with the shipping company and that he had no commercial dealings with any of the individuals sanctioned by the US government. “The fact that it happens to be a Russian company does not mean that there’s any evil in it”, he said.