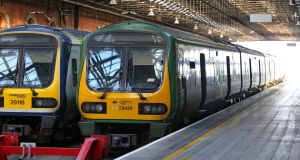 A deserted Connolly Station with parked up trains during the first of five 24-hour stoppages by Irish Rail workers on November 1st, 2017. Photograph: Colin Keegan/Collins Dublin

The head of Irish Rail has expressed concern that a prolonged dispute on the country’s railways is becoming a possibility which would damage its business and threaten jobs in the company.

Tens of thousands of rail passengers will again face disruption on Tuesday as staff at the State-owned transport company stage a second 24-hour strike as part of a campaign for a pay increase.

In a communication to staff on Monday, Irish Rail chief executive David Franks again urged trade unions to go to the Labour Court over their pay claim.

“Despite our financial predicament, we want to be in a position to deliver an improvement in earnings to you. We do not want you to suffer further losses and to see your job security threatened through insolvency.

“It is now time for our trade unions to join with the company in seeking a referral to the Labour Court, and I ask you to support this approach.”

Mr Franks said that with a second day of industrial action set to take place on Tuesday, “we should all be most concerned that a prolonged dispute – with the resulting damage to our customers, our business and your income – is becoming possible”.

“Whilst we remain available to try and find a solution to this dispute, I am very disappointed to advise that since last week’s day of action there has been no formal communication from any of the trade unions, this despite our willingness to refer matters back to the Labour Court.”

Mr Franks said a a prolonged dispute would result in each employee at the company losing thousands of euro in earnings.

He said it would also mean “that our ability to fund any increase in earnings could be completely undermined”.

“We have seen in other transport companies how a failure to engage can lead to a lengthy stoppage, totalling many weeks in lost pay.

“I would reiterate that the Labour Court itself stated that we should refer outstanding issues to it.”

Staff at the company are seeking a pay rise of 3.75 per cent, without provision of additional productivity.

The company said on Monday it had offered staff a 1.75 per cent increase for one year, to be facilitated by measures including performance management, absenteeism management, revisions to redeployment policy and payroll.

It said it had committed to discussing more substantive productivity issues to fund further improvements in earnings beyond the one-year agreement in a defined period.

Unions last week warned that further stoppages could take place in the run-up to Christmas and into the New Year if the dispute was not resolved.

There has been no formal contact between unions and the company since the breakdown of talks at the Workplace Relations Commission in mid-October.

Irish Rail warned passengers on Monday that as over 150,000 journeys were made on its network each day, it could not provide alternative transport arrangements.

The company said other transport operators would not accept rail tickets on dates of industrial action.

The Unite trade union said on Monday that over the past decade, Irish Rail workers had been doing more with less. It said the workforce had fallen by more than 20 per cent, while productivity measured in revenue per employee had grown by a massive 42 per cent.

“Yet workers have been subjected to a near decade-long pay freeze.”

Unite regional officer Willie Quigley said: “The public transport crisis which has seen industrial action in Dublin Bus, Bus Éireann and now Irish Rail has its roots in the ongoing failure to commit to a properly funded public transport system in the interests of the travelling public, the economy and public transport workers.

“Irish Rail employees have had enough, and this was reflected in the overwhelming mandate for industrial action delivered by members of all unions at the company.

“The action which started last Tuesday was precipitated by the breakdown of talks at the WRC – a breakdown which, in the union’s view, was orchestrated by players outside the room.

“Unless management returns to the negotiating table with a credible offer, and the authorisation to make that offer, it is quite possible that industrial action will continue into the Christmas season,” Mr Quigley warned.

In a pamphlet distributed on trains on Monday, the National Bus and Rail Union again argued a pay rise was warranted after 10 years of wage stagnation for rail workers.

It also made reference to the possibility of further strikes being announced over the Christmas period, describing such a course of action as “the nuclear option”.