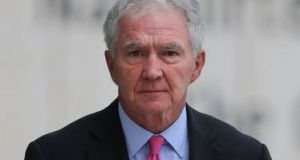 Seán FitzPatrick: in 2017 a trial judge ordered his acquittal following the emergence of flaws in the ODCE’s investigation. Photograph: Getty Image

The State’s corporate law watchdog, Ian Drennan, says he will be “protected” from legal action if he is forced to give legislators a 450-page dossier into the collapse of the trial of Seán FitzPatrick, former chairman of Anglo Irish Bank.

Mr Drennan, who heads the Office of the Director of Corporate Enforcement (ODCE), referred in its annual report on Thursday to efforts by Oireachtas members to seek changes to the law to compel him to hand over the dossier, which he compiled for the Government but which remains unpublished.

The ODCE has refused to hand over the dossier to members of the Oireachtas Committee on Business and Enterprise. It wants assurances from the committee that the office would be protected from any litigation that might arise from the publication of the report’s contents.

The committee recently indicated it wants the law changed to force Mr Drennan to hand over the report. However, his comments in a preamble to the ODCE’s annual report suggest he sees benefits in having his hand forced.

“The committee has recently indicated that, in recognition of concerns previously expressed by the ODCE regarding litigation and associated financial risk, it intends to seek the requisite permissions to compel production [of the report],” wrote Mr Drennan. “[This is] a mechanism that would provide certain protections to the ODCE vis-à-vis the aforementioned risks.”

The ODCE on Thursday night said any changes to the law were “a matter for the Oireachtas”.

In 2017 a trial judge ordered Mr FitzPatrick’s acquittal on charges of misleading the bank’s auditors and providing false information about loans following the emergence of flaws in the ODCE’s investigation.

The ODCE’s annual report also reveals that the fees for the two High Court inspectors appointed to investigate Independent News and Media (INM) have so far reached €550,000. The ODCE says it must “in the first instance” cover the fees for Irish barrister Sean Gillane and UK accountant Richard Fleck.

The inspectors were appointed last year after an application by the ODCE which is investigating a range of issues at INM.

The report says the ODCE last year spent €3.7 million or 72 per cent of its budget. It says it underspent because of unfilled staff vacancies and because it held back a portion of its budget to cover potential legal costs.

The watchdog employed 46 staff at year-end, up from 39 a year previously. This includes seven members of the Garda on secondment.

The ODCE, which is currently a part of the Department of Business, Enterprise and Innovation, is due to be subsumed into a planned new standalone white collar crime agency, the Corporate Enforcement Agency.