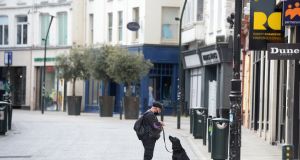 Central Bank of Ireland governor Gabriel Makhlouf has said banks must lend “prudently” amid signs they are tightening mortgage criteria during the Covid-19 crisis.

There have been reports of lenders backing out of loans late in the process, potentially leaving would-be homebuyers at risk of losing deposits. Still, lenders have a duty to act in a “fair and professional way” when dealing with customers, Mr Makhlouf said in a telephone interview on Thursday with broadcaster Seán O’Rourke on RTÉ Radio One.

“It is in everyone’s interest that banks make prudent lending decisions. Part of the problem [over] 10 years ago was that banks made reckless decisions and so did borrowers,” he said.

“If they [lenders] pulled back because the individual borrower’s circumstances was such that [it] cast doubt over the sustainability of the borrowing, I think it’s in the interest of the borrower that the bank actually does pause and takes stock.”

Mr Makhlouf also warned that the European Central Bank’s (ECB) most “severe” scenario – that euro zone gross domestic product (GDP) would contract by 12 per cent this year – is likely to be the most “realistic” outcome that must provide the basis for planning. The ECB’s “medium” scenario is for an 8 per cent decline.

The Law Society has warned that some lenders are backing away from completing loan contracts late in the day, after most usual pre-drawdown requirements have been addressed and prospective housebuyers have committed to contract. This potentially puts deposits at risk.

A number of banks and other mortgage lenders have suspended the use of exemptions to Central Bank lending rules as they grapple with the impact of Covid-19 on the economy. Some are withdrawing loan offers and approvals in principle if borrowers’ incomes or employment have been affected by the crisis or their employer is availing of the Government’s wage subsidy scheme to support salaries.

A spokeswoman for the Banking & Payments Federation Ireland (BPFI) said: “While lenders understand the frustrations that some borrowers may be experiencing because of Covid-19, it should be noted that how a deposit is dealt with in a property transaction is a matter for the solicitors involved.”

The Law Society issued a practice note in June 2009, following the financial crash, recommending solicitors include a special condition in property sale contracts saying that they are subject to the borrower having loan approval at the date of completion that is sufficient to allow the deal to go through.

“If the loan approval changes, a purchaser is entitled to a refund of the deposit, if this special condition had been included in the contract,” the BPFI spokeswoman said.

Meanwhile, Mr Makhlouf, who has been running the Central Bank from Greece since March, having been caught by a lockdown of the country as he visited his ill mother, said he has been “disappointed” by the reactions of some countries as EU officials seek to push through a recovery plan.

“How the recovery is actually funded, whether it’s through coronabonds or through some other mechanism is an issue I don’t have a particular interest in, other than I think we do need action,” he said, adding that it needs to be ambitious and coordinated.

“I’m still hopeful that the European Union will work together,” he said.