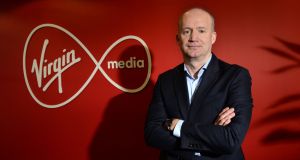 The past month has marked two significant milestones for Virgin Media Ireland chief executive Tony Hanway. The Dubliner turned 50 in October, around the same time as he marked two years with the cable television and telecoms provider.

“I’ve enjoyed the second year a lot more than the first,” is how he sums it up from a corner room that used to be his office. He now sits with the troops in the adjacent open-plan arrangement. “I was asking other people to give up their offices so it was only right for me to do the same.”

Hanway joined the business in late 2015 as it was rebranding from UPC Ireland to Virgin Media and beginning to integrate TV3 into the group. All of the businesses were owned by Liberty Global, the listed US media group controlled by wealthy Irish-American businessman John Malone.

Liberty had acquired Virgin Media in the UK in 2013 and decided to use the same brand in Ireland, which it has licensed from Richard Branson.

Hanway admits that when he joined the business, the “company had been going backwards”.

“The first year was tougher than I expected. We had to make a lot of changes and we were rebranding, which is not to be underestimated. UPC was a good workhorse brand but you’re starting over from scratch. There was no other Virgin business in Ireland so it was unknown territory. And we bought TV3.”

UTV Ireland was later added to its portfolio of television channels, with the station rebranded as be3. “Again, it’s exciting, you’re breaking new ground but it requires a a hell of a lot of new tricks and skills. We brought in some really great people, promoted some good people and, frankly, some people left.”

Contrary to popular opinion, Branson does not own Virgin Media in Ireland. He simply licences the Virgin brand here.

“Virgin do play an interesting role in the company,” Hanway says. “I was with the CEOs of the [other] Virgin businesses about two weeks ago in Richard’s place in the UK and there was about 30 of us there. Some are partly-owned, some are fully-owned and some are licensed. We have to hit a lot of milestones and commitments to justify having the Virgin brand.”

As Hanway tells it, the Irish business has the benefit of both worlds – the glow of the Virgin brand coupled with the operational heft of Liberty.

“They [Liberty] are a big company that moves as quickly as a small company. It’s grown over a long period of time but it’s still not a behemoth with thousands of layers.”

“I doubt anyone is growing the top line or bottom line faster than us in the sector,” he boasts. This should be helped next year by a price increase that is being pushed through.

“Broadband in the past 10 years has been far more a growth industry than television and that’s not unique to Ireland,” Hanway says. “The TV base has stabilised. Broadband continues to grow, mobile is growing quickly [he expects to top 50,000 by the year end and says the unit is ‘pretty much on target’] and our B2B [business-to-business] is growing quickly.”

Virgin is piggybacking on Three Ireland’s mobile network as part of a remedy agreed with the European Commission that allowed Three take over 02’s Irish business.

Another virtual operator on the Three network is ID Mobile, which has been put up for sale here by Dixons Carphone, its listed British parent group. Is Virgin Media interested in acquiring its rival?

“No comment,” says Hanway, which basically means it is.

On the content side, Virgin Media owns the TV3 group and these could be set for a rebrand under the Virgin Media name.

“It’s definitely something that we’re looking at,” Hanway confirms. “It’s been on the agenda for quite some time. We look at the equity that we’ve built up in TV3 and wonder what it would look like as Virgin Media. There’s nothing to say that there wouldn’t be a Virgin Media [TV] station at some stage.”

He describes TV3 as having been “fairly lean but underinvested. You can be lean but the ribs are showing. It’s not healthy”.

There have been back-office synergies from putting the telco and content business together under the one owner, with some €5 million-€7 million invested into TV3’s studios, transmission system, and newsroom technology.

“The three channels look great,” he says. “Ratings are up considerably. We’ve narrowed the gap against RTÉ. There was a time when they were miles ahead of TV3 but there are days now where TV3 is the biggest channel.”

TV3 also pulled off a coup by nabbing the rights to the Six Nations rugby championship from next February.

“It’s a prized asset and it’s what the station needs right now,” Hanway says. “It’s a prized piece of anchor sport for next year. The Irish team is playing pretty good and rugby appeals to a lot of people.”

He bristles at the suggestion that RTÉ is being forced to give up sports rights due to budgetary constraints.

“RTÉ carries 80 per cent of the sport in Ireland. For a company that’s running such a large deficit [€19.7 million last year], it’s always very surprising to me how much sport they bid on.”

Hanway is also opposed to a proposal that Virgin Media and other platforms should pay RTÉ to carry its stations. Given that RTÉ’s channels are among the most viewed on Virgin Media’s platform and that Hanway’s company makes a commercial return on this carriage, why shouldn’t RTÉ be paid for its content?

Hanway argues that, unlike the BBC in Britain, RTÉ is an “advertising-driven business” and Virgin Media is required to carry its stations to give them due prominence on the programming guide.

“Customers have also paid through their licence fee for this content. If RTÉ are to charge people through Sky and Virgin Media, that will be passed on to consumers and is just another charge on them.”

Hanway suggests that RTÉ should deal with the 16 per cent licence fee evasion rate and lobby for an increase to the €160 annual charge, which hasn’t risen since January 2008.

He also believes that the decline of television as a medium has been “greatly overestimated”.

“People are watching as much TV now as they ever did, just in different ways,” he says, citing research suggesting that we all watch about four hours a day on average. “It’s only down a few minutes in a decade.”

We meet on a Monday morning and Hanway reveals that the previous day he watched the whole of X Factor on TV3, saw Manchester United “labouring away against Chelsea, which I enjoyed” and saw all of the Breeders’ Cup horse races from the US on replay. “That was 22 races, and the news. So that would probably be between three and four hours.

“My favourite show, I must admit, is X Factor,” he says with a laugh. “I like the production values and laughing at certain aspects. Getting into it and following the acts.”

Unlikely as it might seem, his ambition is for TV3 to challenge RTÉ for top spot in the ratings.

“There’s no reason why TV3 should accept second place to RTÉ indefinitely. That would setting our ambitions very low.”

And he has no regrets about not participating in the State’s National Broadband Plan to bring the internet to rural Ireland. “We thought long and hard about taking part and I’m absolutely satisfied that we made the right decision not to participate. We felt we could organically increase the size of our network and do that without subsidy.”

“We’ve been vindicated in that by offering services now in Gorey, Arklow, Tullamore, Ballina, Ennis, Drogheda and Dundalk. We’ve added 100,000 homes and we’ll get close to one million homes [from 880,000 currently] in the next year to 18 months.”

Saturation point for Virgin Media would be 70 per cent coverage of homes in Ireland.

Hailing from Killester, Hanway left school after his Leaving Cert and went to work in the public service in the Ombudsman office. He spent four years there before moving to the UK to work for AIB.

His career has been carved out in consumer businesses, with a decade spent with internet group AOL, and a long spell working for telco 02/Telefónica, including senior executive roles in Germany and the Czech Republic. He did a master’s in human resources off his own bat with the University of Leicester.

He “loves” horseracing, his father having worked for a number of bookmakers.

“I’m not mad about gambling but I like the sport. There’s not many sports that we’re world champions at but that’s one of them. Funny, I like flat more than jump racing, which puts me in a minority in Ireland. If I had been a lot smaller, I would have loved to be a jockey.”

He sees “good growth” for Virgin Media here. “The population is growing, it’s a youngish population compared to Europe so the uptake in digital and smart technologies is going to be bigger here. It’s still a favourable place to invest, that’s why we’re building out the network and investing in TV assets and why we see a good future in Ireland.

“I wouldn’t like to get too ahead of ourselves but we’re certainly firing on quite a few cylinders. But I’m cautiously optimistic about next year.”

Name: Tony Hanway
Position: Chief executive Virgin Media Ireland
Age: Turned 50 in October. “What’s disturbed me is the number of people who haven’t said to me ‘you know you don’t look 50’”
Lives: Clontarf
Hobbies: Likes horseracing and jogging
Something we might expect: He’s a big fan of X Factor on TV3
Something that might surprise: He’s a bird watcher: “Handy to live down in Bull Island for it”