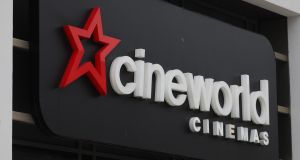 The biggest crisis can be found on the books of the debt-laden major chains, Cineworld among them. File photograph: Bloomberg

These are dark times for cinema. As Hollywood studios postpone releases repeatedly, those screens that remain open have become, in the words of Cineworld chief executive Mooky Greidinger, grocery stores without food.

Industry people now seem to be competing to deliver the gloomiest of takes: Patty Jenkins, director of Wonder Woman and its yet to be released sequel Wonder Woman 1984, said “we could lose movie theatre-going forever”.

The reasons for the immediate crisis are clear. Social distancing in cinemas dents the box office return, rendering unviable the big-budget films that attract people to the full popcorn-accessorised, shared-entertainment experience. The closure of cinemas then has a knock-on effect on smaller, independent films that may be less reliant on achieving full houses, but nevertheless depend on a big-screen release as part of their financial cycle.

While the most ardent of Irish film fans took the opportunity to return to cinemas before Level 3 necessitated their closure once more, many people will have felt that after months of isolation, if they were to spend time in a room with strangers of unknown health status, they would much rather be doing it in a restaurant having a conversation with friends over food they did not have to cook themselves. This points to a medium-term subdued vista for the pictures, even after their doors can reopen safely.

Meanwhile, streaming services – which were already threatening movie exhibitors’ business model before Covid-19 – are thriving, their offerings now the best film entertainment available. Consumer habits may well have permanently shifted in their direction by the time the pandemic is over.

But the biggest crisis can be found on the books of the debt-laden major chains, Cineworld among them. The question is not whether Wonder Woman or James Bond or any superhero can save cinema, but how many cinemas will be left for them to save.