Offer for 61% of Sky not already owned by media tycoon values broadcaster at £18.5bn 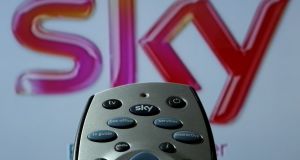 Concerns have been raised about the role of Rupert Murdoch’s son James, who is Sky’s chairman and Fox’s chief executive. Photograph: PA Wire

Fox’s offer of £10.75 per share for the 61 per cent of Sky it does not already own values the Game Of Thrones broadcaster at £18.5 billion.

The deal, which shareholders will still have to vote on, comes five years after the media tycoon’s last tilt at taking full control of the business through News Corporation.

That bid was derailed after the company – which owns the Sun and the Times – was forced to abandon the bid when it became embroiled in the phone-hacking scandal involving News International.

21st Century Fox said: “The strategic rationale for this combination is clear. It creates a global leader in content creation and distribution, enhances our sports and entertainment scale, and gives us unique and leading direct-to-consumer capabilities and technologies. It adds the strength of the Sky brand to our portfolio, including the Fox, National Geographic and Star brands.”

Attention will now turn to UK culture secretary Karen Bradley, who has until Christmas to decide whether to refer the deal to Ofcom.

Earlier this week, the UK government pledged to be “scrupulously fair and impartial” in its handling of Mr Murdoch’s attempt to gain full control of Sky.

Labour has raised objections to the takeover, and in an urgent question in the Commons said prime minister Theresa May must show she will stand by her promise to stand up to powerful interest groups.

UK minister for culture Matt Hancock said robust procedures are being put in place to ensure Ms Bradley – who can intervene in the deal on public interest grounds – is impartial.

A number of Sky shareholders, including Standard Life Investments and Jupiter Asset Management, have also questioned the offer price since news of the bid broke last week.

But Martin Gilbert, deputy chairman of Sky, has moved to assuage their concerns.

“We, supported by our advisers, believe 21st Century Fox’s offer . . . will accelerate and de-risk the delivery of future value for all Sky shareholders.

“As a result, the Independent Committee unanimously agreed that we have a proposal that we can put to Sky shareholders and recommend.”

Investors have also raised concerns about the involvement of Mr Murdoch’s son – James Murdoch – who is Sky’s chairman and Fox’s chief executive.

Thomas Moore, investment director at Standard Life Investments, has said that the role of James Murdoch in the two companies means “this can’t be an arms-length deal”.

Fox said that it expects to complete the deal before the end of 2017.

1 Fiona Reddan: Who’s afraid of Revolut? Not AIB and BOI it seems
2 Lahinch Golf Club runs out of its own cash after €3m Covid-19 hit
3 Son putting elderly dad under pressure to sign over land
4 France demands digital tax payments from US tech groups
5 BOI customers to be charged twice with bank fees on New Year’s Eve
6 Workers have little idea of the cost of retirement income
7 Why Lehman Brothers was allowed to fail
8 Must I pay tax on sale of inherited apartment in Baltics?
9 Teleworking now beginning to make its impact
10 Ryanair warns it may reduce more Irish services and relocate operations
Real news has value SUBSCRIBE