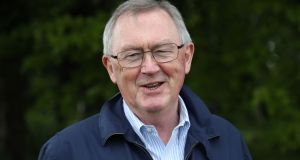 RTÉ has clarified remarks made by one of its senior radio officials, who said broadcaster Seán O’Rourke would never work for the station again, and left the door open to him possibly returning in the future. File photograph: Nick Bradshaw

RTÉ has clarified remarks made by one of its senior radio officials, who said that broadcaster Seán O’Rourke would never work for the station again, and left the door open to him possibly returning in the future.

Peter Woods, the head of RTÉ Radio One, said in an interview this week that Mr O’Rourke and the national broadcaster had parted ways for good over his attendance at the Oireachtas Golf Society dinner in Clifden, Co Galway.

“I can’t see it ever again. Business is business,” he told The Irish Times.

RTÉ clarified his remarks in a statement yesterday, saying it “does not rule out working with him at some time in the future”.

Asked about Mr Woods’s comments, Mr O’Rourke said: “I was completely taken aback because Peter’s words certainly didn’t tally with the conversation I had with Jim Jennings [RTÉ’s director of content] on Monday and I didn’t believe they reflected RTÉ’s position.”

He added that he had spoken to Mr Jennings since and had “satisfied myself that my interpretation of the situation is correct”.

Mr O’Rourke was one of more than 80 people who attended the golf dinner on August 19th which went ahead despite Covid-19 guidelines limiting the size of indoor gatherings. In the wake of the controversy, RTÉ announced that Mr O’Rourke, who retired from his weekday programme in May after turning 65, would not be starting a new project with the broadcaster as planned next month.

He was expected to take over the Saturday afternoon show hosted by Cormac Ó hEadhra, who is moving to co-present the weekday Drivetime Radio One slot.

“By mutual agreement we are not going ahead with what was planned but that does not mean there may not be other work in the future,” said Mr O’Rourke.

He also took issue with Mr Woods saying that he could be hired by a rival station but that RTÉ was judged by different standards.

“I don’t think RTÉ corporately believes that RTÉ itself or indeed any other station that might decide to work with me at some point in the future would in some way be lowering standards by doing so,” said Mr O’Rourke.

Mr O’Rourke said yesterday that the last few days had been “quite turbulent” and it was “disappointing not to be starting the broadcasting work I had hoped to do from next month”.

“The right thing for me to do in the circumstances was to stand aside. I fully accept that, because it was a very bad mistake to attend the dinner,” he said. “It is a big price to pay. But I know it was the right thing to do. In this pandemic others have suffered far greater misfortune, not self-inflicted.”

RTÉ said in its statement that it held Mr O’Rourke “in high regard and knows him to be a person of integrity. He has served the organisation very well over his career. RTÉ wishes him well in his future endeavours”.

Meanwhile, a review by Ms Justice Susan Denham, requested by the Supreme Court, into the attendance of Mr Justice Seamus Woulfe at the Clifden dinner has no set deadline but is expected to be completed before the start of the new legal term in October, a source close to the court said.

Separately, former Fianna Fáil minister of state Áine Brady has been asked by the charity she heads to answer a number of questions about her attendance at the golf dinner.

The board of Third Age, a national organisation for older people, held an online meeting on Thursday to discuss the matter.

Jack Nolan, a former assistant Garda commissioner who chairs Third Age’s board, said there was a “full and frank” discussion of “all the known facts and circumstances” of Ms Brady’s attendance at the event during the meeting.

He said that Ms Brady attended “in a private capacity” and was entitled to a full hearing on the matter.

Ms Brady and her auctioneer husband Gerry, both former TDs for Kildare, were both listed as attending the dinner. Kildare was under tightened lockdown restrictions at the time, which meant residents were restricted to travel within the county except for work or vital family or medical reasons.

Efforts to contact Ms Brady for comment have been unsuccessful. In a statement reported by the Leinster Leader this week, Ms Brady said she wished to “unreservedly apologise” for her attendance and that she was disappointed it may have distracted from the work of Third Age.