Lengthy exchange of correspondence is revealed in High Court documents 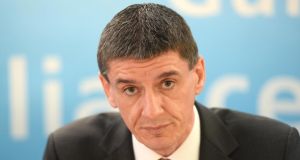 Ian Drennan: he said he was concerned at “the extent to which it now appears the board accepted whatever the former chairman said without question”

The depth and severity of the rupture in relations between the board of Independent News and Media (INM) and the company’s former chairman Leslie Buckley is laid bare in an exchange of letters between their respective solicitors earlier this year.

In the letters, sent during April and May, Mr Buckley accuses INM of making him a “scapegoat” for the problems that have engulfed the company, prompting investigations by the Office of the Director of Corporate Enforcement (ODCE) and also the Data Protection Commissioner (DPC).

INM’s former chairman, who was a representative of Denis O’Brien, who owns just under 30 per cent of the media company, refers to INM’s efforts to address issues thrown up by the ODCE’s application for the High Court to appoint inspectors to work inside the company, as a “pseudo-investigation” in which INM “has already reached a pre-determined conclusion”.

INM responded by accusing Mr Buckley of being untruthful, of “deliberately misleading” the company, and castigating him for, in the company’s view, refusing to offer any explanation for accusations made against the company by the ODCE.

The letters were moved between Mr Buckley’s solicitors A&L Goodbody, and INM’s solicitors McCann FitzGerald, and form part of a large volume of exhibits lodged with the High Court as part of the ODCE’s case.

Filed with the letters is an affidavit by Ian Drennan, the director of corporate enforcement, replying to sworn statements made on behalf of INM.

In his replying affidavit, Mr Drennan attacks the INM board for its subservience to Mr Buckley during an earlier internal inquiry carried out by Deloitte, a finance and risk management consultancy. This was an inquiry into a possible data breach that concluded that there had been none, a conclusion accepted by the then board of INM.

What was concerning, said Mr Drennan’s affidavit, was “the extent to which it now appears the board accepted whatever the former chairman said without question”.

“I regard it as highly concerning that the board of a publicly-listed company appears to have been so willing to passively accept the account of its then chairman, notwithstanding the evidence available to it suggesting that the former chairman’s account might be inaccurate, and at the very least might require further scrutiny or scepticism,” Mr Drennan said in his affidavit.

The conclusion of the internal inquiry was effectively jettisoned in August 2017 when INM reported to the Data Protection Commission that there had in fact been a major data breach.

In January 2018, Mr Buckley resigned as chairman, and in April INM wrote to 19 people (journalists, former INM executives and lawyers) telling them that they had been singled out in the data breach as “persons of interest” in the trawl of INM emails by external companies paid for by a Denis O’Brien-controlled Isle of Man company Blaydon.

In a fourth affidavit Mr Drennan indicates he does not believe the breach was confined to 19 people. He says it appears that “the entirety of INM’s data set was searched against specified search terms, [and] that means that all employees’ data was searched”.

Mr Drennan does not disclose what the search terms were (which could indicate the motive behind the search and, possibly, for whom it was conducted) and does not indicate if such litigation could extend to persons with whom INM employees corresponded, thereby widening the field of potential litigants substantially beyond the INM workforce.

Mr Buckley responded to INM’s letter to the 19 by requesting a copy of it, saying his “reputation has been very significantly damaged” by it. He took issue with the company’s assertion that the data breach was unauthorised and done at his behest, and said he was “extremely surprised and disappointed” that he was not given an opportunity “to address the very serious allegations” made against him.

“INM has already reached a pre-determined conclusion that the alleged data breach was entirely Mr Buckley’s fault and has communicated that conclusion to numerous other parties,” said an April 19th letter from his solicitors.

INM solicitors replied the next day saying he could not have a copy because it was “private and confidential”, but referred him to a statement on INM’s website.

“INM has acted entirely fairly and appropriately regarding your client and has afforded him every opportunity to provide a frank and honest account of what occurred,” said the letter from INM’s solicitors.

On April 27th, Mr Buckley hit back, decrying what he characterised as INM identifying him “as the person responsible for a potential data breach by INM in 2014”.

His solicitors’ letter continued: “We understand that Deloitte’s report of the investigation was accepted by the board in September [2017] and INM made no allegation whatsoever of any wrongdoing or inappropriate behaviour on the part of our client.

“In direct contrast to that position, however, INM now appears to have adopted a highly prejudicial stance whereby blame for the potential data breach has been clearly attributed to our client, causing very significant reputational damage.”

On April 30th, INM solicitors said it was “essential that [Mr Buckley] provide us with a full explanation” of the allegations of a data breach, carried out and paid for on his orders. He had told the board that IT consultants had been engaged to examine costs, but new information suggested otherwise.

“The new information exhibited by the ODCE indicates that the searching may have been conducted for and on behalf of Mr O’Brien, and/or for his personal benefit,” wrote McCann FitzGerald. “In addition, the documentation provided appears to contradict your client’s explanation as to how the invoice for the services came to be discharged by Blaydon Limited. Your client served on the board in INM as the nominee of Mr O’Brien.”

The letter demanded a reply by May 4th.

The exchanges continued through the month, each party sparring with the other and culminating in a five-page missive from INM dated May 22nd.

It went back over all of Mr Buckley’s alleged behaviour, saying the board was “appalled and horrified by the information that has emerged and by your client’s conduct, both as a protagonist in the data-searching exercise and in misrepresenting what has occurred”.

“It has substantially undermined public confidence in INM as a media organisation, for which trust, data security, confidentiality and source protection are absolutely critical to business,” said the letter.

Mr Buckley replied on May 25th, referring to the “imprecise and inaccurate language” of INM’s May 22nd letter, which it said was “inappropriate”.

It referred to the “very significant evidential threshold” that INM would need to reach in any action against him, and, in the penultimate paragraph, issued the following warning: “we suggest your client considers very carefully which allegation it chooses to make in any proceedings”.

On May 30th, INM issued a summons against its former chairman, claiming breach of fiduciary duty [ie trust], negligence, breach of contract, misrepresentation and damages for negligence and wrongful interference with the company’s economic interest.

He responded with a public comment. “I will fully and robustly defend myself against each and every allegation,” he said.