Seen & Heard: Row at INM and hopes fade for House of Fraser 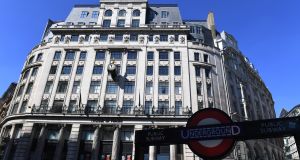 A House of Fraser store in London. Photograph: Facundo Arrizabalaga/EPA

“A row has blown up” between Denis O’Brien and Independent News and Media (INM), where O’Brien is the largest shareholder, over board appointments, according to the Sunday Times. The paper reports on correspondence between INM and Mr O’Brien’s Baycliffe company, which says Kieran Mulvey, whom Mr O’Brien wants to appoint to INM’s board, “is being messed around”. The story says INM wants any new O’Brien appointments to be paired with independent directors.

A Dublin business that sought additional power capacity from ESB Networks was told that new data centres had eaten up capacity that traditionally would have catered for 30 years’ growth, according to a report in the Sunday Times.

The Sunday Business Post reports on an internal client note at consultancy EY that predicts a further €5.3 billion of sales of Irish toxic bank debt will complete this year. The EY “guide for potential buyers of distressed Irish debt” lists a range of upcoming sales by Irish banks, including the Project Glas sale of mortgages by Permanent TSB that completed last week.

Brexit will deliver a major “financial shock” to Ireland’s small and medium enterprise sector, according to a Department of Finance tax strategy group document, reported in the Sunday Business Post. The document warns that the return of duty-free shopping with Britain would strain the State’s finances.

The Sunday Independent reports that Google has agreed to lease six floors at the Grand Canal Quay docklands building owned by Denis O’Brien. The extra space, as well as a planned deal to buy the nearby Treasury building from developers Johnny Ronan and Paddy McKillen, are part of Google’s “drive to expand” in the area, the paper says.

The Sunday Telegraph reports that hopes for a rescue deal for retailer House of Fraser, which operates a large store at the Dundrum Town Centre, are “fading” after a “cash crunch forced the price of its bonds into a rapid spiral”. A putative Chinese-led rescue stalled last week, sending the bonds into a nosedive.

Asian shares hold ground as China virus fears persist 07:19
Dear prudence, Thunberg vs Trump and patience is a virtue 06:41
Overlooking the virtue of patience in business comes at a cost 05:30
Davos 2020: Worlds of Trump and Thunberg collide on a Swiss mountainside 05:23
Climate apocalypses, ‘clerical errors’ and an update on the streaming wars 05:20
Search executive
jobs on irishtimes.com