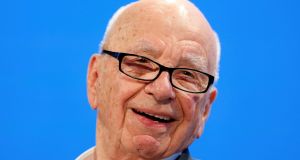 The Rupert Murdoch-controlled radio company Wireless Group fell to a €9.7 million loss in its most recent set of accounts after revaluing some of the groups assets.

The radio group, which controls a number of Irish radio stations, reported the loss in the 18 months to the end of June 2017 after being acquired by Mr Murdoch in September 2016.

That loss came on the back of a revaluation of intangible assets by Duff & Phelps which enabled the group to take a €13.2 million charge.

In the Republic, Wireless owns FM104 and Q102 in Dublin, LMFM in Louth and Meath, Cork’s 96FM and C103, and Live95FM in Limerick. It also owns U105.8FM in Belfast and operates an advertising sales house in Dublin.

In Britain, it owns 12 local radio stations, most of which are based in the north west of England, while earlier this year it was part of a consortium that won the licence to operate the second national UK digital radio multiplex, D2, on which it has launched three new stations, TalkRadio, TalkSport2 and Virgin Radio.

“The radio market in 2016/17 proved to be challenging with the continued growth in digital revenue,” the directors said in their commentary. “There has been some slippage in audience as people moved more towards speech radio,” they added.

The group’s turnover increased 28 per cent to €31.7 million in the accounting period, although the period was six months longer than its comparison. At the same time staff numbers fell from 267 to 259.

Accounts for station’s under the company’s control were also recently filed, with Q102 reporting a profit before tax of €62,948, down 86 per cent, and FM104 recording a pre-tax profit of €2.05 million, up almost 4 per cent. Both companies were also taking advantage of the longer 18 month accounting period.

Both FM104 and Q102 cut their staff headcount after coming under the control of Mr Murdoch, who acquired them in a £220 million deal.

All of the stations are under the control of News Corp which also owns the Sun, the Times and the Sunday Times newspapers, as well as the Dublin-based news agency Storyful.

The Wireless Group was the company left behind after UTV Media sold its television assets and the name UTV to ITV plc in 2015. The company’s main commercial jewel is the UK national station TalkSport, which holds lucrative football radio and digital audio broadcasting rights.

Earlier this year, The Irish Times reported that Wireless had considered a potential bid to acquire Newstalk from Denis O’Brien.

1 Why gift a son now if it eats into his tax-free inheritance threshold?
2 Can we finally say farewell to the scourge of hot-desking?
3 Big Four told to outline plans for audit split in UK by October
4 Dispute over €2.95m sale of Georgian property struck out
5 Vienna digital rights group takes court action over DPC complaints progression
6 Flights abroad ban could last all summer
7 Mortgage arrears: Prevention is definitely better than cure
8 Global markets surge after positive economic news in Far East
9 Court told hearing into dispute over Setanta Centre redevelopment not so urgent
10 Sean Dunne contempt case to be heard in November
Real news has value SUBSCRIBE