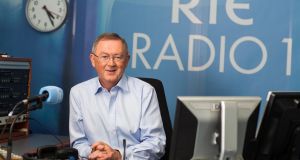 Radio 1’s Sean O’Rourke: His listenership is a record for the 10am to noon slot since RTÉ first faced competition from Newstalk. 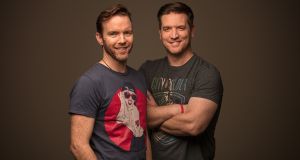 Radio 1’s Sean O’Rourke has added 28,000 listeners over the past year, making the RTÉ presenter one of the best performers in the latest radio ratings and taking the audience for the slot to a new record high.

This is the highest audience for the slot in 15 years, but it is also a record for the slot since Radio 1 first had to compete with Newstalk.

Much of the annual gain was recorded in the first three months of 2017, with the show putting on 22,000 listeners since the last quarterly survey.

It means Mr O’Rourke has pulled further ahead of Kenny, whose Newstalk morning show added 1,000 listeners since the last survey, taking his audience on the Communicorp station to 148,000.

Morning Ireland, the most listened-to radio programme, slipped 7,000 since the last survey to 441,000, but all other peak-time shows on Radio 1 grew their audience.

Tom McGuire, head of Radio 1, said Mr O’Rourke had solidified his reputation for “credible”, in-depth interviews with the “principal figures” in the news stories of the day. “The programme has grown in different ways, and the team has also grown with Sean,” he said.

RTÉ 2fm and Communicorp’s Today FM both made gains this time. 2fm’s Breakfast Republic drew level with Today FM’s long-running Ian Dempsey Show at 167,000 listeners, although Breakfast Republic has the advantage of a running time that is twice that of Dempsey’s show.

“Our battle is not really with them,” head of 2fm Dan Healy said of Today FM.

The RTÉ music station’s other daytime shows added listeners since the last survey, suggesting that it is on track to shake off a difficult 2016. It now reaches more 15-34-year-olds than it did a year ago.

“We are very happy now with where we are,” Mr Healy said, adding that Jenny Greene’s collaboration with the RTÉ Concert Orchestra was continuing to put “positive energy” into the public service broadcasting aspect of 2fm’s brand.

On Today FM, Ian Dempsey’s audience was flat compared to the last survey and down 13,000 year-on-year. However, the audience for the 9am to noon slot on Today FM increased by 12,000 since the last survey.

This suggests that former lunchtime presenters Dermot Whelan and Dave Moore have lent new momentum to the station since inheriting the mid-morning slot at the start of 2017 from Anton Savage, who left Today FM in December.

Today FM said its audience of 176,000 between 9am and noon “proved the popularity” of Dermot & Dave. Afternoon presenter Fergal D’Arcy added 10,000 listeners since the last survey, with his audience of 113,000 marking a five-year high for the slot.

The station, overseen by Keith McCormack, is launching a 40-second television ad next week, which McCormack said would be “a big statement of intent”.

This was the first quarterly gain in listeners for Today FM in two years.

Today FM’s sister station Newstalk introduced a new schedule in September and a clear picture of how it is performing won’t emerge until later this year. Newstalk is currently without an station editor or a chief executive, with the latter post among the senior roles stood down by Communicorp earlier this month.

Radio 1, the biggest single station, increased its peak-time market share to 23.8 per cent. Today FM has a 7.7 per cent market share, while 2fm is next with 6.1 per cent, ahead of Newstalk with 5.8 per cent. RTÉ Lyric FM has a 2 per cent share.

More than half of listening - 54.3 per cent - is to regional or local radio stations, with Highland Radio, Northern Sound, Radio Kerry and MWR all holding majority share positions in their respective franchise areas.

Almost 17,000 people were interviewed by research firm Ipsos MRBI on behalf of the radio industry over the 12-month period of the survey.