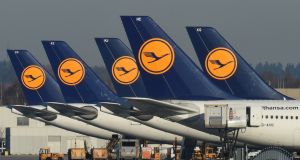 While the improved profit was driven by its cargo and maintenance arms, Lufthansa said demand was also good at its airlines.

Germany’s Lufthansa swung to a first-quarter profit, driven by improved demand at its air freight division and maintenance unit, and said on Thursday it was seeing improved price trends at its airlines.

It was the first time Lufthansa had made a profit in the first quarter of the year – typically a weak quarter for airlines – since 2008.

While the improved profit was driven by its cargo and maintenance arms, Lufthansa chief financial officer Ulrik Svensson said demand was also good at its airlines.

Yields, a measure of pricing, dropped 2.4 per cent in the first quarter excluding currency effects, compared with a decline of 4.1 per cent for the full year 2016.

However, despite the strong start to the year, Lufthansa did not make any changes to its guidance, confirming a forecast for underlying earnings to fall slightly in 2017 from last year’s €1.75 billion ($1.91 billion), hurt by rising fuel costs.

Mr Svensson said the group did not yet have enough information on how the important third quarter, which includes the busy summer travel season, would pan out.

According to travel data analysis company ForwardKeys, demand for Europe is rebounding this year after demand from long-haul travellers was dampened last year by a series of attacks in France, Brussels and Germany.

Lufthansa said in a presentation on its website that demand was good in North America and Asia in particular.

Lufthansa reported adjusted earnings before interest and tax of €25 million against a loss of €53 million a year ago and compared with expectations for a loss of €26.6 million in a Reuters poll.