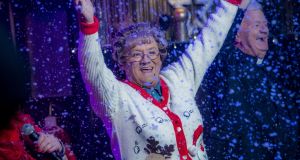 The festive episode of Mrs Brown’s Boys claimed what is by now its traditional prize of being the most-watched programme on Irish television over the Christmas period.

The special, titled Exotic Mammy, was watched by an average of 612,000 people on RTÉ One at 10pm on Christmas Day. This was a 41 per cent share of people watching traditional television channels at the time, including 37 per cent of 15-34s.

The first Christmas special for Cork-set comedy The Young Offenders, meanwhile, drew 480,000 viewers in the slot that followed from 22.35pm. This was 36 per cent of people watching television at the time, and 39 per cent of 15-34s.

The special, which had aired on BBC One on Sunday, guest-starred Robert Sheehan alongside Alex Murphy, Chris Walley and Hilary Rose and has also been streamed 18,000 times to date on the RTÉ Player, RTÉ said.

Both The Young Offenders and Mrs Brown’s Boys are BBC commissions with co-production financing from RTÉ.

The broadcaster said Christmas Day viewing by 15-34-year-olds to RTÉ channels was up the previous year.

On RTÉ2, an average of 232,000 people watched a Christmas Eve repeat of the Father Ted special A Christmassy Ted, which was first broadcast in 1996.