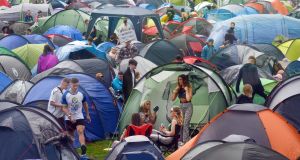 The State’s competition watchdog is launching a detailed investigation into the sale of MCD Productions, the concert promotion company founded by impresarios Denis Desmond and Caroline Downey.

Last August, Mr Desmond and Ms Downey struck a deal to offload half of MCD to the global music giant Live Nation. This transaction will now being examined by the Competition and Consumer Protection Commission (CCPC), the watchdog said on Thursday night.

MCD, one of the largest concert promoters in Europe, was bought by LN-Gaiety (LNG), a UK-based company that is a 50/50 joint venture between Live Nation and Mr Desmond and Ms Downey’s Gaiety Investments.

Mr Desmond and Ms Downey previously fully controlled MCD, but by selling to LNG they effectively retained a half share.

“Following a preliminary investigation, the CCPC has determined that a full investigation is required in order to establish if the proposed transaction could lead to a substantial lessening of competition,” the CCPC said.

The watchdog will publish its reasons for launching a full investigation within 60 days, it said. It has also given “interested parties” two weeks to make submissions to it on the deal under investigation.

Ultimately, following its phase-two investigation, the CCPC has the power to either block the deal or attach “competition remedy” conditions for its approval, if it deems that consumers will be affected.

The deal buttressed the operations here of LNG, whose Irish interests already included Festival Republic, which runs Electric Picnic. In effect, the transaction gave Live Nation, which is one of the largest live music companies in the world, a far stronger Irish presence.

MCD has long been a dominant force in the live music scene in the State, and it is now also one of the main promoters in the UK and continental Europe.

Its recently announced shows for 2019 include the singer Ariana Grande, who will play the 3 Arena in Dublin’s docklands in September.

MCD has also backed productions over the years for major acts such as Madonna and U2. It has put on concerts recently for Hozier, the Take Me To Church singer who is separately managed by Ms Downey.

The Gaiety theatre and the Olympia, which are separately owned by Mr Desmond and Ms Downey through Gaiety Investments, were unaffected by the Live Nation deal.

Mr Desmond has been contacted for comment on the CCPC’s decision, but has yet to make a response.