INM heads had major dispute over price tag on Newstalk 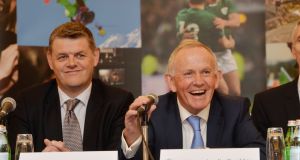 Independent News & Media chief executive Robert Pitt and the group’s chairman, Leslie Buckley, had a major dispute over the price tag of a proposed bid by the listed company for Newstalk, which is owned by INM’s biggest shareholder Denis O’Brien.

The dispute is understood to have led the chief executive to consider his position.

INM has confirmed an “issue” arose between the two men “in relation to the terms of a possible acquisition by the company”.

In a statement, the group said discussions on the possible acquisition “ended at a preliminary stage and the acquisition was never considered by the board”.

The statement was issued following detailed queries by The Irish Times.

“The board established a sub-committee to review the issue,” the statement said, “and the sub-committee reported to the board that no issue of concern arose for the company.

“The board has, with the agreed absence of the CEO and chairman, unanimously adopted the committee’s report.”

The Irish Times understands the row between the two most senior figures at the media group arose over the price that INM should pay for national radio station Newstalk in a proposed bid some months ago.

It is understood that Mr Pitt wanted to offer a lower price than a valuation obtained by Communicorp, Newstalk’s owner.

It is understood there is a gulf between the two valuations, with the Davy valuation believed to be lower.

A sale of Newstalk to INM, which appears to be off the table at the moment, would have resulted in a significant payout for Denis O’Brien, Communicorp’s owner.

Communicorp also announced on Monday that its chief executive Gervaise Slowey had resigned and would leave the group at the end of the year.

Mr O’Brien is thought to have held discussions earlier this year with the Broadcasting Authority of Ireland over the possibility of selling Newstalk to INM, which would give Ireland’s biggest publishing group its first foray into the regulated radio market.

The schism between Mr Pitt and Mr Buckley is understood to have resulted in serious boardroom tensions, with suggestions from sources that Mr Pitt may leave the company over his disagreement with Mr Buckley.

In the statement last night, INM said: “The board and the company’s management remain fully focused on the business and in ensuring that day-to-day operations are conducted as normal.”

At the time of INM’s interim results in August, analysts at stockbroker Davy predicted that “management’s ability to create value from [its €62 million] cash pile would determine the future trajectory of the group”.

INM recently made a print acquisition, regional publisher Celtic Media Group, but has long been on the hunt for digital assets.

Separately, INM could face a legal challenge to its plan to close the company’s defined benefit pension scheme in a move that would slash the pension benefits of active and deferred members.