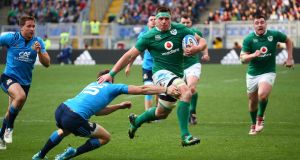 RTÉ is conducting a technical field trial for Saorview Connect, the on-demand upgrade to the Saorview platform that it first announced in January 2016. But no launch date has been set for the service, which was originally supposed to go on the market last year.

Saorview Connect, a partnership between RTÉ transmission subsidiary 2rn and UK television platform Freesat, is designed to offer much greater levels of functionality than the current generation of Saorview set-top boxes.

The service will make on-demand content available alongside the 10 Saorview channels through a broadband-connected set-top box, meaning it should be possible to integrate apps such as Netflix onto the platform.

TV3 Group has indicated that it had no plans to add the high-definition (HD) version of its main channel to Saorview ahead of the Six Nations tournament next spring.

RTÉ charges channels tariffs for carriage on Saorview in order to pay for the cost of transmission. TV3 Group has made objections to the level of these charges in the past, while former Ceann Comhairle of the Dáil Seán Barrett, who had a role in relation to Oireachtas TV, also queried them.

The Oireachtas TV channel is the most recent addition to the Saorview line-up. The other channels on the service are RTÉ One HD, RTÉ2 HD, TV3, TG4, 3e, Be3, RTÉ News Now, RTÉjr and RTÉ One+1, with the latter two channels sharing a spot on the platform. TG4 HD is also absent.

RTÉ has contracted Thinkhouse, the marketing agency that claims an “innate understanding of youth culture”, to handle the promotion and public relations for Saorview Connect as soon as the launch date is fixed.

Richard Waghorn, RTÉ’s director of transformation and technology and a member of its executive board, is overseeing the project for the publicly funded broadcaster.

Saorview, operated by 2rn, was first launched in 2011 as a digital terrestrial television (DTT) service to replace the analogue television signal. A related satellite service, Saorsat, is used in some rural areas that the Saorview signal cannot reach.

The latest study of television reception types by Nielsen shows there are 192,000 Saorview-only or Saorsat-only homes as of July, up from 187,000 a year earlier.

This accounts for about 12 per cent of the 1,591,000 “television homes” in the Republic of Ireland (the figure excludes those households that do not possess a traditional television set).

Some 41 per per cent of television homes, or 660,000 households, receive Saorview or Saorsat in some capacity.

Saorview Connect will bring the free-to-air platform closer to the functionality available through pay-TV platforms. The new features will include a facility to catch up on missed programmes by scrolling back through the electronic programme guide, as well as a remote recording function.

Separately, RTÉ is in the process of upgrading the RTÉ Player.