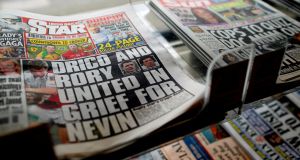 Latest figures from the Audit Bureau of Circulations show the Irish Daily Star had an average daily circulation of 44,925 in the Republic last year.

The publisher of the Irish Daily Star recorded a 7 per cent drop in profits last year, its latest accounts show.

The latest figures from the Audit Bureau of Circulations (ABC) show the tabloid had an average daily circulation of 44,925 in the Republic last year, which represented a drop of 7 per cent.

In spite of the decline in turnover and profits, Independent Star increased its dividend payment to shareholders to €2 million, up from €1.6 million in 2015.

The Dublin-based news publisher is jointly owned by Independent News & Media and the UK’s Northern and Shell Media Group.

INM provided printing distribution services to a total value of €5.5 million, which was down from €5.87 million in 2015.

Northern and Shell Media, which is controlled by billionaire businessman Richard Desmond, provided news and content to a total value of €400,000, which was unchanged from the previous year.

A spokesperson for INM said that the operating profit achieved at Independent Star was a “good result” for the newspaper, given that revenues in the sector are “contracting at a rate of circa 7 per cent or more per annum”.

In 2011, the company opened a state-of-the-art print plant in Luton, producing a portfolio of newspapers and magazines as well as providing third-party printing services.

Trinity Mirror, the publisher of the Daily Mirror, said last week it was in talks to buy Mr Desmond’s Northern & Shell titles. Mr Desmond bought the Express titles in 2000 for £125 million.