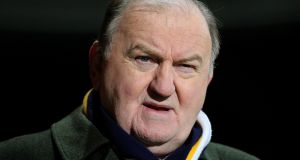 Newstalk tweeted just after 9am on Friday that George Hook had been suspended from all duties and that the process arising from his comments last week about rape and responsibility would continue. File photograph: Lorraine O’Sullivan/Inpho

Newstalk hopes to conclude the process arising from George Hook’s controversial comments on rape by next week, following its decision to suspend the presenter.

The radio station tweeted just after 9am on Friday that Hook had been suspended from all duties and that the process arising from his comments last week about rape and responsibility would continue.

On its website, the station, which is part of the Denis O’Brien-owned Communicorp media company, said the suspension came after Hook’s comments were condemned by groups such as the National Women’s Council of Ireland.

Newstalk declined to comment on the details of the ongoing process. Sources indicated the company had wished to implement the suspension earlier in the week, but had not been in a position to do so until Friday, following an intense process of discussions. Newstalk anticipates the overall process will come to a conclusion by next week.

Speaking on Friday at the Fine Gael think-in in Co Tipperary, Taoiseach Leo Varadkar said he strongly disagreed with the comments that Hook had made.

“Nobody who is raped or sexually assaulted is ever responsible for that in any way,” he told RTÉ’s Morning Ireland programme. “So I totally disagree with and abhor the comments that he made. He has since then of course apologised, apologised profusely and I think he does understand that what he said about this issue and on that occasion also in the past is unacceptable. I think it’s indicative of attitudes that still exist in Irish society that need to change.”

On September 8th, when referring to a UK rape case on his lunchtime show, High Noon, Hook questioned why a woman had gone back to the hotel room of a man she had just met, asking: “Is there no blame now to the person who puts themselves in danger?” He later apologised unreservedly for the comments.

The controversy escalated with the withdrawal of advertisers from High Noon over the course of the week. Tesco confirmed on Thursday evening that it had ceased advertising during the programme. A number of other major brands are believed to have taken similar action.

Another of the station’s presenters, Dil Wickremasinghe, refused to go on air this weekend due to Newstalk’s handling of the issue, and a letter strongly criticising management was signed by up to 20 staff.

Sean Moncrieff, who presents the afternoon show directly after Hook’s programme, tweeted that it had been “an incredibly difficult week at Newstalk. But I’m immensely proud of the professional and brave staff here.”

In Hook’s absence, High Noon was presented on Friday by Ciara Kelly. The suspension was not debated on any of Newstalk’s programmes over the course of the day, although presenter Ivan Yates mounted a defence of the station’s policy on gender equality, citing the large number of women who had worked in production at Newstalk over the years.