Imposition of ‘graduated response’ policy on copyright infringement to be sought 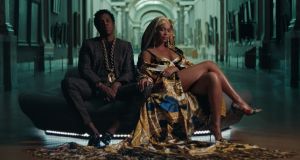 Beyoncé and Jay-Z’s latest album, ‘Everything is Love’, has shot to the top of the pirate download charts.

Three global music labels are limbering up to seek a High Court order against Sky Ireland to force it to implement a “three strikes and you’re out” policy against its broadband customers who download music from pirate sites.

Sony Music Entertainment, Warner Music and Universal Music have asked Sky to impose the “graduated response” policy on copyright infringement that other internet providers introduced under pressure from the music industry.

The music companies are also in similar discussions with Vodafone Ireland, which has raised technical concerns and sought more time. It is expected the music giants may shortly also seek an order against Vodafone.

Sky, which accounts for more than one in eight fixed-line Irish broadband accounts, has told the music companies it would comply with their request, but not without a court order.

Sky said last night it was “actively working” with the music industry to combat piracy, which it said “puts jobs in the creative economy at risk”.

“It’s therefore important that companies like ours do what they can, alongside the Government and the rest of the media and technology industries, to help protect copyright,” Sky said.

“Copyright holders who believe broadband users have unlawfully shared content online have the option of taking their cases to court. If the order is granted, the service provider must comply and Sky would, of course, comply with any such order.”

Sony, Warner and Universal have turned to high-profile copyright lawyer Helen Sheehy in their action against Sky, which was initiated in the High Court this week but hasn’t yet come to hearing. Ms Sheehy made no response to requests for comment.

Papers supporting the application have been filed by Willie Kavanagh, the music industry executive who chairs the Irish Recorded Music Association, of which Sony, Warner and Universal are members.

Irma has been at the centre of attempts by the Irish music industry for almost a decade to force internet providers to implement tough anti-piracy policies.

Music is often illegally pirated via sites such as Pirate Bay or KickassTorrents, which use peer-to-peer software to share files. The sites are often blocked by internet providers, but pop back up under different addresses.

Under the “three strikes” rule, music companies send internet providers anonymised lists of their customers who have pirated music. The broadband provider warns the user. If pirating persists, their service is ultimately suspended.

Eir agreed to implement the policy in 2009. UPC (since taken over by Virgin media) followed suit after a 2013 court case. It is understood Virgin recently agreed to continue it.