‘I love the place’: US billionaire John Malone on his €300m Irish portfolio

International investor talks about his assets in Ireland, Netflix, Trump, and succession plans 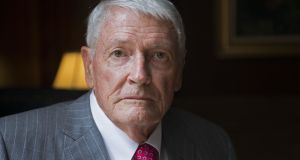 John Malone, chairman, Liberty Group was one of the first international investors to take a punt on Ireland after the economy collapsed in 2008. Photograph: Dave Meehan/The Irish Times

American billionaire John Malone relaxes into a boardroom chair in a meeting room of the five-star Intercontinental hotel that he owns in Ballsbridge, having just visited the studios of TV3, another Irish asset under his control. It’s all part of a summer tour of his portfolio of assets in Ireland.

“I’ve been here three weeks,” the 77-year-old says. “My daughter came over with the grandkids. It’s the first time that they’ve been here and they stayed about a week. We stayed at Castlemartin but we went down to Humewood a couple of times. We toured around a little. They’re lovely [places].”

Castlemartin in Kilcullen, Co Kildare was once the family estate of Sir Anthony O’Reilly before he was forced into bankruptcy. Malone bought it in 2015 for €26.5 million.

He picked up Humewood Castle in Kiltegan, Co Wicklow in 2012 for €7.2 million. Malone estimates that he has spent about €300 million in the past decade on a portfolio of personal assets in Ireland.

His hospitality assets are held by MHL Hotel Collection with local partners John Lally and Paul Higgins. It has 11 hotels in Dublin, Galway and Limerick, comprising 1,250 bedrooms and annual turnover of €135 million.

This is separate to his media interests here. Liberty Global, a listed US company he created and still chairs, owns the Virgin Media cable TV, broadband and phone provider, and the Ballymount-based broadcaster TV3, will be rebranded as Virgin Media at the end of August.

Malone is a canny investor and picked up most of his assets in Ireland at knockdown prices. “It’s called diversification,” he says, leaning back in the leather chair. “I’ve got great partners [in Ireland].”

This is a reference to Lally and Higgins, who are both connected with property developer Lalco. “These guys, as a result of the Celtic Tiger collapse, found themselves de facto bankrupt. Through no fault of their own.

“Out of the goodness of their hearts they helped me to figure out the Humewood restoration – we would frankly have been lost without them – because we bought the place on a whim and didn’t have a clue how we would go about restoring it. But we thought it would be a fun project.

“They had lost it to Nama. When they heard that we were buying it they just showed up and said ‘we love the place and if we can help you we will’. Hell, they found me a great lawyer, they found me a great architect, they found me a wonderful general contractor ... and we built it up to over 300 craftsmen at the peak for two and a half years. It was a great experience, we really enjoyed it. My wife [Leslie] just loves restoration.”

What was the cost of restoring the 8,000sq m Victorian Gothic castle? “I kinda lost track but it had to be well north of €50 million,” he replies.

Malone, who has Irish roots, was one of the first international investors to take a punt on Ireland after the economy collapsed in 2008, and the global markets stopped lending the country money. Malone says he had no hesitation backing Lally and Higgins.

“I just said, ‘I love the place, Ireland looks great to me. If you want to go back into real estate development, I’ll be happy to invest in it and you can have sweat equity in it and if we do well you guys can recover’, and that’s what put us in business together.”

Liberty Global chief executive Mike Fries sits in on the interview and says Virgin Media in Ireland is “looking great” and “really on fire” at the minute. “Our bread and butter in Ireland is broadband, where we have a 50 per cent market share on our footprint,” he says.

Virgin Media network currently passes about 900,000 homes here. Global streaming giant Netflix is available through its set-top boxes, with Fries describing the company as “more of a partner than a competitor”. “On our box you can watch the Netflix content, you don’t have to switch out and we get a revenue share from Netflix. Netflix finds that when people watch Netflix through us they churn less, they’re happier.”

Malone owns some stock in Netflix and tried to buy the business years ago when he was chairing satellite operator DirecTV in the US. “Reed Hastings [Netflix chairman and chief executive] rejected the proposal pretty quickly and he was smart to do so. It’s an extremely well run company. Reed Hastings is a genius.”

According to Malone, the standardisation of the internet and the emergence of high-speed broadband over the past decade were game changers for disrupters such as Netflix.

“Once the internet was standardised, people like Apple and Microsoft could think about global scale because they could build devices or software that could be exploited across global markets. That was the game changer because it’s scale that really makes the difference here. The social networkers likewise: scale plus their ability to come up with applications.”

He sees Walt Disney’s desire to merge with Rupert Murdoch’s Fox as “very much a scale play”.

“If you go to the studios now, if you talk to Rupert, if you talk to Bob Iger [Disney chairman and chief executive], to Brian Roberts [Comcast chief], they’re all sitting there scratching their heads thinking how can we be number two to Netflix. How can we get there before Amazon gets there?

“Everybody has content online. Netflix has a head start and a great brand. They’re not going anywhere but up.”

He was the Alpha male. With 16 other Republican candidates, he turned them into dwarfs. You have to hand that to him

We turn to US president Donald Trump, who is threatening to disrupt the world order by imposing tariffs on a broad range of imported goods. Malone is a Republican supporter and made a personal donation of $250,000 (€215,000) to Trump’s inauguration.

Is he a fan? “I certainly would not call myself a fan. I have had vague business relationships with him over the years. What I would say is that he is giving voice to a series of issues or problems that exist and that were largely ignored by the political system in America.

“He was the Alpha male. With 16 other Republican candidates, he turned them into dwarfs. You have to hand that to him. He is a great television personality. He said Jeb Bush was low energy. What’s Jeb Bush going to do? Get his mother out to say it wasn’t true? Trump is masterful at that.

“That combined with a New York real estate developers toughness, really appealed to a certain set of the public who felt the Democrats were becoming too politically correct.

“Time will tell if his negotiating style can work. The guy is a loose cannon. His ego is bigger than his brain, he’s got thick skin, he counter punches very hard, he can’t take any criticism.

“He’s never developed a team, the only team that he’s got in his business that he promotes is his own family, his kids. I think he was totally surprised when he won.”

Asked about his own leadership style, Malone says it’s about finding “great management” and supporting them “all the way”.

“My experience is you have to delegate and you have to trust. You coach if you’ve got those skills, you support, you promote and you just try and make sure you pick the right people and that you’re playing in the right playground. It’s easier to swim downstream than upstream.”

Looking out over the next decade, Malone sees the pace of technological advancement only quickening, and acknowledges that humans could be displaced by robots or machines in certain activities.

“Those are serious concerns but I don’t think there’s any stopping this technological evolution. There may at some point be efforts to control and avoid some of the worst possible consequences. But these are difficult things to stop.

“We could clone people today, I’m sure, and probably the North Koreans are. There’s probably 10 new versions of little rocket man right now sitting in some lab somewhere.

“In the industries I know, they’re only speeding up [technological advancement], they’re not slowing down.”

We close with a question about succession. “In the case of most of my long-time CEOs they have the first right to acquire my control stock when I’m pushing up the posies. The number one succession plan was to arrange for continuity and, in most cases, the CEO with the help of the companies that they run could manage that opportunity or burden, whatever you want to call it.

“I’ve got 13 public companies that the [US] government says I control, and then I’ve got five or six other businesses that would be worth individually quite a bit. My wife and I decided a long while ago, that most of my things go into a charitable foundation.

“My kids are well provided for and they’ve got their own stuff going on. So I primarily look to the management and boards of the companies I’m in for continuity. I don’t think I would want to see some fire sale from my estate. I want to see continuity. They’re all doing a good job and I trust them.

“So if John Lally rings me up in the morning and says ‘John, I think it’s time to bail on the Irish hotel business because Brexit is going to go the wrong way and all of our British tourists won’t be able to afford to come over here’, I would say ‘ok’. I’d hate to do it but I’d take his advice.”