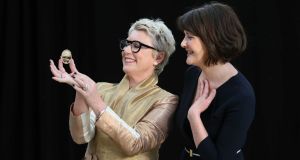 Moya Doherty was joined in the RDS Concert Hall by RTÉ’s Keelin Shanley and other guests, to talk about her career. Photograph: Sasko Lazarov

RTÉ chairwoman and Riverdance co-creator Moya Doherty has become the first woman to be awarded the RDS gold medal for enterprise.

Ms Doherty received the award at a ceremony in the RDS Concert Hall on Wednesday.

The RDS Gold Medal for Enterprise builds upon the founding aims of the RDS which is to actively promote excellence in key areas of Irish life. The recipient must have shown outstanding professional and leadership skills, and have an outstanding track record in business achievement which has contributed to employment and economic development in Ireland,” said RDS chief executive Michael Duffy.

“Moya Doherty has amply displayed all of these qualities during her career and we are delighted to recognise her successes in this way.”