European shares cap losses as euro weakens against the dollar

In Dublin, rises for Arytza, Datalex and IN&M while Ryanair slips back on strike warning 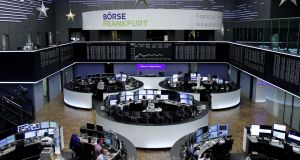 The DAX board at the stock exchange in Frankfurt, December 6th. Photograph: Reuters

European shares recovered most of their earlier “risk-off” losses on Wednesday, with an easing euro and a positive open on Wall Street offsetting falls in richly valued tech stocks.

Global stocks also pared the worst of their losses after a sell-off in Asia amid the broad risk-off mood. US treasuries rose with the dollar as investors’ focus turned to efforts to avert a US government shutdown on Saturday.

Wall Street turned weary later in morning trading, however, with a slide in energy stocks as investors readjust their stock holdings.

The Iseq slipped a fraction – 0.04 per cent – on very thin trading volumes.

The Swiss-Irish bakery group Aryzta, whose main listing is in Zurich, rose more than 2.5 per cent a day after news emerged it will raise €84 million after selling La Rousse to Musgrave, and from an imminent dividend from Picard. The company’s AGM takes place on Thursday in Dublin.

Newspaper group Independent News & Media rose by more than 3 per cent amid a climate of consolidation in the sector.

Ryanair slipped by 0.4 per cent as news emerged it is facing industrial action from staff in Italy.

Hammerson tumbled 33p to 501.5p after confirming it had agreed to an all-share takeover of rival Intu in a £3.4 billion deal that will create Britain’s biggest property company.

BP rose 2.5p to 494.25p as it announced plans to build its third lubricants plant in China for around 1.5 billion yuan (£169 million) in the biggest investment of its kind for the oil giant.

Shares in over-50s travel and insurance firm Saga plunged 38.8p to 142.5p after it warned that the collapse of airline Monarch had hit earnings and said efforts to attract new customers would impact profits next year.

Mulberry jumped 48p to 1,065p as investors shrugged off a widening half-year loss, as the luxury handbag maker said that strong international demand and tourist spending had helped offset a slowdown in the UK market.

Across Europe, the French Cac 40 and German Dax ended the day down 0.02 per cent and 0.38 per cent, respectively.

European tech stocks fell 0.6 per cent. The sector has come under pressure recently as worries that a chip market boom could soon come to an end has dented sentiment towards a sectors that in Europe has been the best performer so far this year.

Shares in chipmakers STMicro, AMS and Infineon fell 3.7 per cent, 5.9 per cent and 1.5 per cent. Other top fallers included the French Elior Group, down 7 per cent following results.

Shares of Microsoft, Facebook and Google parent Alphabet rose more than 1 per cent.

Home Depot slipped 1.5 per cent after gaining about 36 per cent this year, following the home improvement chain’s announcement of a $15 billion share repurchase plan. The stock was the biggest drag on the S&P 500 and the Dow.

H&R Block rose about 7 per cent after the tax preparation service provider reported better-than-expected revenue. Oil slipped more than 1 per cent after a surprise rise in US inventories of refined products that suggested demand may be flagging.

Newfield Exploration fell 3.4 per cent and Range Resources slipped 2.7 per cent, the biggest decliners on the S&P energy index.