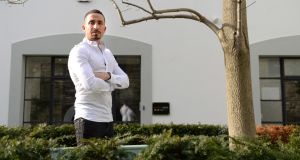 Niall McGarry, the founder and majority owner of Maximum Media, who has stepped back from executive responsibilities at the Irish business. Photograph: Dara Mac Dónaill/The Irish Times

In a statement that follows last week’s change of management at the Joe.ie and Her.ie company, the board of IAB Ireland said its publisher council would “continue to review” its commercial charter to make sure it was working to uphold agreed transparency standards on digital audiences.

Maximum Media’s majority owner Niall McGarry stepped back from the running of the Irish business last week to focus on its UK operation. He told The Irish Times he believed his “personal brand is overshadowing” the business and that the click farm controversy had given him a reason to step away.

His move came in the wake of a Business Post report that a click farm had been used to inflate the audience of an episode of Maximum’s since-discontinued podcast Capital B. This prompted marketing group Core to suspend its advertising with the company.

After an initial conference call and emergency board meeting, IAB Ireland met Justin Cullen, the Maximum Media chairman who has now become its executive chairman, and chief commercial officer Gillian Fitzpatrick on November 29th to discuss the incident and management changes.

“Maximum Media assured the IAB Ireland board of its commitment to full adherence to IAB Ireland’s publishers’ commercial charter, which Maximum Media signed up to along with all other publisher members of IAB Ireland in 2018,” the organisation led by chief executive Suzanne McElligott said.

IAB’s publisher council will now provide biannual updates to the board of IAB Ireland on the charter, which contains pledges relating to online traffic reporting and verification, fraud, non-human traffic, privacy and brand safety.

IAB Ireland earlier noted that ad fraud deprived advertisers of reaching valid audiences, while other publishers lose out from the purchase of fraudulent inventory. While it said it did not have a regulatory remit to investigate members’ business practices, it condemned any fraudulent or misleading practices in the industry.