Darren McCaffrey, Dublin correspondent at Sky,is the highest entry in the rankings 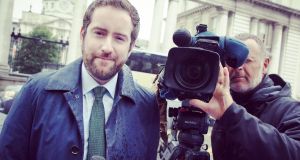 Matt Cooper remains the most influential Irish journalist on Twitter while The Irish Times has the highest number of representatives in an index compiled by public relations firm Murray.

The latest rankings see the Last Word presenter retain his number one spot after ousting Des Cahill last year. He is also named the leading broadcast journalist on the social media platform.

There were 29 new entrants in this year’s Top 100 list with Darren McCaffrey, who was appointed Dublin correspondent at Sky last June, the highest new entry. He was placed in 12th spot overall and is also the highest ranked news journalist.

In its fourth year of publication, more than 720 journalists were ranked across six parameters including popularity, quality of engagement and level of activity.

Overall, the 100 most influential Irish journalists on the platform have close to three million followers between them, a rise of 16 per cent year-on-year.

The Irish Times has the highest number of influential journalists by outlet at 18, followed by RTÉ with 15, Independent News & Media with 14 (17 if you include the Irish Daily Star and Sunday World), the Sunday Business Post with 9, Newstalk with 5, the Sunday Times/The Times with 4 and the Irish Examiner and TV3 with 3.

David McWilliams retained the position of having the most followers on Twitter, adding over 35,000 since last year. Miguel Delaney remains the most prolific Tweeter with an average of 59 tweets per day, closely followed by Ewan McKenna of the Independent (52 tweets per day) and Newstalk presenter Dr Ciara Kelly (49 tweets per day).

1 Passengers face queuing in car parks at Dublin Airport
2 Major credit union plans to limit savings accounts to €40,000
3 Ikea among major retailers to reopen next week
4 Woodchester founder Craig McKinney dies
5 Brother is dragging his heels as executor of uncle’s will - is there anything I can do?
6 Penneys will not reopen on Monday despite expected changes to lockdown rules
7 Student accommodation sector set for harsh Covid-19 lesson
8 Angela Merkel sweeps in to save the euro zone
9 Credit union limit, Penneys stays shut, more stimulus and shopping for Ireland
10 Want to help the coronavirus recovery? Go shopping
Real news has value SUBSCRIBE