Mediahuis’s €145.6m acquisition of INM was given the green light earlier this week 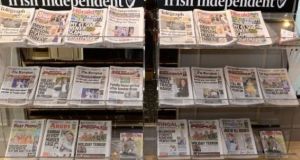 Belgian group Mediahuis has overhauled the management team and board of Independent News and Media (INM), after formally completing its €145.6 million takeover deal for the newspaper publishing group.

Control of the business shifted to INM’s new owner on Wednesday via a slew of new appointments. The handover took place a day after the High Court sanctioned a scheme of arrangement to give effect to the takeover, and two days after it was approved by Minister for Communications Richard Bruton.

INM announced the appointment of Marc Vangeel, the former chief executive of Telegraaf Media Groep in the Netherlands, as its new chief executive. Mr Vangeel succeeds Michael Doorly, who left the business on Wednesday after leading INM since October 2017.

Mr Vangeel has more than 25 years experience in the media sector, which includes leading the integration of Telegraaf into the Mediahuis group following its acquisition in 2017.

INM also said its managing director of publishing for Ireland, Richard McClean, has moved to the role of chief operations officer.

Peter Vandermeersch, a former editor-in-chief and director of the Dutch news media group NRC Media, has been appointed publisher, and will be responsible for overseeing INM’s digital strategy, as well as the continued development of its various print titles.

In addition to his time at NRC, Mr Vandermeersch spent almost three decades as a journalist and was editor-in-chief at the Belgian newspaper De Standaard.

Mr Vangeel, Mr McClean and Mr Vandermeersch will form INM’s new executive committee, to which all other managers in the group will report.

In a surprise move, INM chairman Murdoch Mac Lennan has agreed to stay on in that capacity as the company transitions from a publicly-listed entity to a private one. It is understood he has signed up for a three-year stint.

INM directors who left their boardroom roles on Wednesday include Catriona Mullane, who had links to former INM major shareholder Denis O’Brien; John Bateson, who was the board nominee of Dermot Desmond; Kieran Mulvey, who was a nominee of Mr O’Brien, and independent director Seamus Taaffe.

Mr Mac Lennan said he was glad that the scheme had passed and that INM’s previous shareholders will now receive payouts for their stock.

“It is a privilege to remain on as chairman and oversee the integration of INM into Mediahuis, as part of which I am confident the company’s operational and digital capabilities will be significantly enhanced,” he said.

Trading of INM shares on the stock market was suspended on Wednesday, and its listing was due to be cancelled as of Thursday.

1 ‘I don’t need to do any of this. . .I don’t actually need to work.’
2 Admission of mistake in Oxford vaccine dose raises doubts over reliability
3 Direct sea routes to Europe offer certainty in choppy Brexit waters
4 Only way is up for Stripe as valuation skyrockets
5 Pandemic brings a halt to Zara-owner’s Irish expansion
6 Basic income for all: Has the Covid crisis given us a new economic model?
7 Unilever’s Dutch and British arms merge after 90 years ahead of Brexit
8 There was no vaccine for Anglo: Why the last crisis was different
9 A tale of two pandemics for Smurfit Kappa and Greencore
10 White knights or loan book cannibals – what will happen at Ulster Bank?
Real news has value SUBSCRIBE