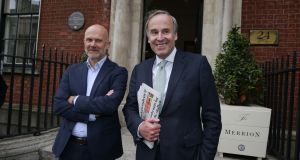 The Government has given a green light to the €145.6 million takeover of Independent News & Media (INM) by Belgian group Mediahuis, ahead of an application from INM seeking the approval of the High Court on Tuesday.

The Government must formally approve all media mergers in the State. INM told its investors on Monday that Richard Bruton, the Minister for Communications, has “unconditionally” cleared the proposed deal, which has already received the imprimatur of competition regulators.

The deal is being carried using a scheme of arrangement, which requires the approval of the High Court. This will be sought at the court hearing. If the court approves it, it will clear the way for the deal to close by the end of the year.

At a shareholders’ meeting last month to approve the transaction, some INM retail investors criticised the sale price as “catastrophic” – when INM’s cash pile is stripped out, Mediahuis is effectively acquiring the business for about €64 million. INM directors, however, defended the deal and said it was the best price available.