ITV has a repeat hit but does it risk getting burned by reality series overkill? 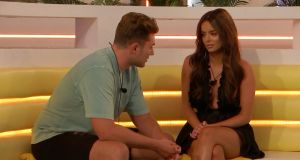 High on sunshine, Love Island broadcaster ITV has responded to the success of its Majorca-based baby by announcing that next year it will have two – Winter Love Island and Summer Love Island (not their actual titles) – and soon, if this double-helping pans out, it will be running an entire archipelago.

Seasons will run concurrently in an island league, with transfers, relegations, promotions and pundits, plus the occasional plea of is “Love Island season over yet?” But it won’t be. Because in order to please shareholders, ITV will be obliged to keep pumping out Love Island, together with such addictive spin-offs as Weird Crush Island, Annoying Habit Island and the dramatically satisfying Ex Island.

Demand for spray tans and modular furniture would rocket in this scenario. But would ITV’s share price? Maybe, for a bit. Advertising woes mean its stock has lost about a third of its value over the past year and more than halved since a 2015 peak.

This Brexit-assisted slide has put the broadcaster firmly “in play” as a target for a takeover, or, if you like, a marriage with a nice rich company. As on Love Island, the benefits of coupling up are structurally built in.

ITV must display itself to its best advantage, and Love Island, a two-month affair that handily spans the second and third quarters, has the obvious charm of being a rare hit with hard-to-get 15-34-year-olds, allowing both the commissioning broadcaster and series importers like Virgin Media Television to coin it for once.

Sort of. To go with its big money sponsorship deal with Uber Eats, ITV this year raked it in from deals with a travel partner (Jet2Holidays), fashion partner (I Saw It First), haircare partner (VO5), suncream partner (Superdrug), soft drinks partner (Lucozade) and handset partner (Samsung). These nice extras swelled the income from that advertising reserved for the actual ad breaks and meant the company’s ad revenues didn’t fall by 6 per cent in the first half of 2019 as previously forecast. They, um, fell by 5 per cent.

Love Island, in other words, is helping a free-to-air commercial broadcaster tread water. It is not yet the raft that will deliver it to financial paradise.

In the Irish market, the phenomenon has been rather more unequivocally brilliant for Virgin. Ratings on Virgin Media Two were way up this year on the 2018 series average of 150,000 for the channel (then known as 3e), with the audience boosted above 250,000 and even 300,000 on occasion, thanks in part to Maura Higgins, the contestant who attracted such epithets as “Irish sparkplug” (Lena Dunham), “Longford firecracker” (the Longford Leader) and “without doubt the most incredible woman reality TV has ever seen” (Caitlin Moran).

Virgin’s ad breaks were stuffed with an eclectic range of Generation Z and millennial-targeting brands that could be divided into two groups. There were household names in search of young recruits, such as Domino’s Pizza, McDonald’s, Heineken, Eir, Vodafone and sponsor Tesco Mobile, and then there were those advertisers that don’t typically pop up during the news: iClothing, bBold tanning tips, Nasty Gal, Vavavoom.ie, Slendertone.

Alas, the Love Island season five party is over. Virgin has valiantly moved on to rebound fix with Love Island USA, while ITV has placated investors by teasing its winter series of undetermined length, which will be set in South Africa in early 2020. It’s a transparent move. ITV is succumbing to the common business temptation of trying to milk it.

It feels rational. Love Island, a twisty hybrid of Big Brother, The Only Way is Essex, Blind Date and Hollyoaks, is popular. Why not feed viewers their favourite dish over and over? The logic is then heightened by ITV’s public company status. Right now, it can only really trumpet this particular money-spinner in its second and third quarter trading statements with any conviction. In the first and fourth ones, harking on about Love Island inevitably come off as tentative and distant, the island’s happy flutters having long since faded.

But in plumping for the just-make-more approach, there’s a strong chance of seeming a little desperate anyway. A company with more latitude than ITV can afford to strike a more aggressive position in the balance between innovative novelty and conservative familiarity. One that grabs hold of its “bankers” for dear life and never stops talking about them looks comparatively low on confidence and high on fear.

It’s always possible that the law of diminishing returns won’t apply this time. ITV might not dive headlong into saturation territory. It could merely flirt with it instead, all the while reaping the rewards of unashamedly catering for untapped demand.

But there are reasons to suspect that a winter Love Island won’t repeat the same magic. Rival broadcasters will, for starters, put up much more of a scheduling fight in January than they will in July. And do viewers really want to watch contestants in bikinis and boxers when it’s snowing outside their window? Surely even the sight of a villa will make some switch off in disgust.

Until now, Love Island has been an intense but strictly time-limited summer fling. If it’s on air up to four months a year, it starts to look worrying like – oh my god – serious commitment.

1 What is Covid Tracker Ireland? The HSE’s new app explained
2 British holiday home rental company exits Irish market
3 Ireland’s economy forecast to shrink 8.5% due to Covid-19 pandemic
4 Will family’s tax debt stop me getting my inheritance?
5 TikTok to quit Hong Kong mobile market ‘within days’
6 Why gift a son now if it eats into his tax-free inheritance threshold?
7 How to save money while helping to save the planet
8 Poverty could afflict more than one-in-five children in State by year end
9 Can we finally say farewell to the scourge of hot-desking?
10 Central Bank governor to call for ‘credible’ path’ to cut State debt post-Covid-19
Real news has value SUBSCRIBE