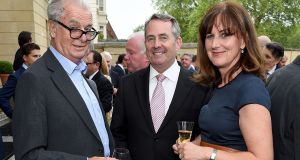 Many years ago, when he was at the height of his public relations prowess, it was said of Tim Bell that, “he was so charming dogs would cross the street just to lick his hand”.

There’s clearly a lot of PR spin on that bon mot but Lord Bell’s schmoozing skills in the PR industry are legendary; not for nothing was he known as Mrs Thatcher’s favourite ad-man. Rescuing the reputation of the firm that bears his name looks beyond even his talents, however, after shocking revelations about how it deliberately stirred up racial tensions in South Africa.

Bell Pottinger is one of the City’s leading PR agencies but also one of the most controversial: along with its corporate clients, it has acted for a number of questionable political figures, including Syria’s first lady, Asma al-Assad; the Belarusian dictator Alexander Lukashenko; and the Pinochet Foundation.

The South African scandal centres on its work for the billionaire Gupta family, for which the PR firm was paid £100,000 (€109,500) a month. As part of a campaign in support of South African president Jacob Zuma – to whom the Gupta family has close ties – Bell Pottinger employees attempted to stir up anger about “white monopoly capital”.

Their intention was to deflect attention from the activities of its clients the Guptas, and their methods included creating a fake blog and twitter account. They also misled or undermined journalists who questioned its “economic emancipation” campaign.

It was, according to Francis Ingham, head of industry body the Public Relations and Communications Association (PRCA), “the most blatant instance of unethical PR practice I have ever seen”. He added: “Bell Pottinger’s work has set back South Africa by possibly 10 years.”

The firm Bell co-founded some 30 years ago has now been thrown out of the PRCA, a ban that will remain in place for five years. But will Bell Pottinger last that long?

Clients are cancelling their contracts, senior account executives are walking, and shareholders too are heading for the hills. The firm’s second-largest investor, Chime Communications, has written off the value of its 27 per cent stake in the business and abandoned its attempts to offload the shares.

To compound the PR disaster, Bell Pottinger failed to own up to what had happened when the allegations first surfaced, breaking another golden rule of the reputation management game.

Chief executive James Henderson, the largest single shareholder in the firm, had previously dismissed the allegations, claiming the firm was the victim of a smear campaign. He was forced to resign over the weekend, saying that while he had not worked on the South African campaign, he took ultimate responsibility.

The relationship between Henderson and Bell has been strained for some time. Mrs Thatcher’s favourite ad-man stepped down as chairman of the business a year ago but is understood still to be receiving a salary from the firm that bears his name. He hasn’t been doing a very good job of salvaging its reputation, however.

For example, as Bell Pottinger media trainers no doubt drum into their clients, always make sure your mobile is switched off when appearing on live television. On Monday night, Lord Bell’s phone went off not once, but twice during a disastrous interview on the BBC’s Newsnight programme, in which Bell insisted he had nothing to do with the South African scandal.

Asked by presenter Kirsty Wark if he thought it was “curtains” for the firm, Bell replied, “almost certainly”. Before his phone started ringing, Bell had kicked off the interview by quoting Sir Walter Scott to a somewhat bemused Wark: “Oh what a tangled web we weave when first we practise to deceive.” Only a PR man could say that with a straight face.

Not surprisingly, clients are already rushing for the exit. Banking giant HSBC said yesterday it would no longer work with the firm and building group Carillion has also severed ties. This follows the exit of lucrative clients including the luxury goods group Richemont and the South African banking group, Investec.

Other clients include the Harry Potter publisher Bloomsbury and the supermarkets chain Waitrose, owned by the John Lewis Partnership, which must surely be considering their positions since the shocking South African revelations.

More departures are inevitable. After all, who would willingly trust their reputation to a firm that has so scandalously squandered its own?