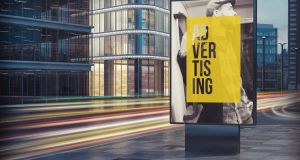 Out-of-home advertising will be one of the few traditional media markets to grow in 2019, GroupM predicts.

Advertising buyers in GroupM expect the Irish ad market to grow less than 1 per cent next year, as the shadow of Brexit and its uncertain toll on marketing budgets lingers over the media.

“We simply don’t know what the full extent of this will be, but undoubtedly the impact will be more negative than positive,” said Bill Kinlay, GroupM’s chief executive in Ireland.

With media consumption habits “being completely turned upside down”, next year’s growth will be almost entirely due to ongoing expansion in online advertising.

Television advertising revenues are forecast to grow only 1.7 per cent next year after estimated growth of 2.3 per cent in 2018 – a year in which retailers, bankers and consumer goods companies increased their campaign budgets, but spending by car and telecoms firms dropped.

It will be the fourth consecutive year of decline for the Irish radio sector in 2019, if GroupM’s forecasts prove correct. It expects radio advertising to contract 4.8 per cent next year after a 5.7 per cent drop in 2018.

But the starkest falls are reserved for print. Newspaper advertising revenues will drop by 11 per cent in 2019, GroupM predicts, coming on top of an estimated 12 per cent decline in 2018 and an 11 per cent contraction in 2017.

Magazines are expected to fare a little better, with a decline of 4.7 per cent next year after a 3.9 per cent retreat in 2018 – a year that saw two titles, the Irish Studio-owned U and Irish Tatler Man, stop printing.

Better fortunes are pencilled in for out-of-home advertising, which is forecast to see growth of 3.5 per cent next year after an estimated 3 per cent bump in 2018, while cinema advertising will also secure a modest uplift.

GroupM is owned by the world’s largest advertising company, WPP. In Ireland, it is the holding company for Mindshare, MediaCom and Wavemaker with billings in more than €170 million and a staff of 168.