Superheroes beaten at box office by ‘Mamma Mia!’ sequel and ‘A Star is Born’ remake 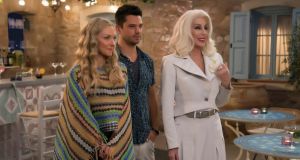 Irish cinemas have enjoyed a stellar box office in 2018, with musical hits Mamma Mia! Here We Go Again and A Star is Born set to push takings past last year’s total to its highest annual level this decade.

Cinema advertising specialists Wide Eye Media said box office earnings from more than 500 screens in the Republic were likely to exceed 2017’s full-year performance of €113.7 million by about 5 per cent.

The Irish box office record – unadjusted for inflation – was set in 2009, when takings reached €124.6 million, and comedy The Hangover was the number one film.

The box office then fell to €116.3 million in 2010, when Avatar was the top-grossing film, and this remains the best year for Irish cinemas this decade until the 2018 performance is confirmed. The last big release of the year, Mary Poppins Returns, opens in cinemas today.

The number of admissions this year, however, will remain below the 21st century peak of 18.3 million set in 2007.

Admissions are expected to total about 16 million in 2018, Wide Eye Media said. This would be similar to 2017’s tally, suggesting the average ticket price has gone up in the past year.

“The 2018 box office takings for the year to date in Republic of Ireland have already matched the final figure for 2017 and we are on track to hit 16 million admissions again this year,” said Wide Eye Media chief executive Eoin Wrixon.

The extreme and unusual weather conditions experienced this year had no impact on cinemagoing, he added.

“The quality and diversity of the films released in 2018 proved a powerful attraction all year long, resistant to both blizzards and heatwaves.”

The Abba-soundtracked musical Mamma Mia! Here We Go Again, the summer sequel to 2008’s even more successful Mamma Mia!, looks set to edge the new version of Hollywood classic A Star is Born in the annual top 10.

Universal’s Mamma Mia! Here We Go Again has taken in €5.3 million at the Irish box office, while Warner Bros’ music-themed romantic drama A Star is Born, directed by Bradley Cooper and starring Cooper and Lady Gaga, has earned €5.17 million as of December 16th. The latter film, released in October, is still showing on several screens.

Takings for the long-anticipated Disney musical Mary Poppins Returns, with Emily Blunt in the role made famous by Julie Andrews, will be spread across two years.

Movie musicals have “rocked the box office” in 2018, Mr Wrixon said, with four of the top 10 films for the year to date belonging to the genre. In seventh place is Bohemian Rhapsody, the biopic about the rock band Queen, while tenth place is currently held by The Greatest Showman.

Starring Hugh Jackman, the hit musical was released in 2017 but has stayed in the top 10 throughout 2018 as “incredible demand” saw exhibitors retain it on screens to capture repeat-viewer business. Fans also attended sing-along events.

The musicals theme is set to continue in 2019, with releases including Cats, re-imaginings of The Lion King and Aladdin, and Elton John biopic Rocketman.

At the international box office, however, superheroes remained the heavyweights to beat throughout 2018.

Avengers: Infinity War, in third place in the Irish year-to-date chart, was the top-grossing film worldwide, while Black Panther, eighth-placed here, was the highest-earner in the US and Canada and the second biggest film worldwide.

Both titles are superhero ensemble movies set in the Marvel cinematic universe and distributed by Marvel’s owner Disney.

In the US, box office receipts are expected to set a new record this year, while in the UK cinema attendances are on track to reach their highest level since 1971.

The robust performance will be reassuring to exhibitors given it has come at a time when Netflix is aggressively taking on Hollywood. The streaming company is spending billions on content and planning to produce as many as 90 films a year, with most of these productions not destined for cinemas.

Research published by Wide Eye Media suggests that the rise of streaming services may complement cinema rather than kill it, as “heavy” streamers are more likely to also be heavy cinemagoers than people who don’t watch films through online platforms.

The resilience of the medium can also be seen in an expansion of the number of cinema screens in the Republic from 426 in 2007 to 505 last year.

Historically, cinemagoing in the Republic peaked in 1954, eight years after the estimated post-war admissions high in the US.

Admissions for the 327 cinemas operating in the Republic were recorded at 54 million in 1954, but the attendance habit dropped sharply over the subsequent decade as people bought television sets.

The pattern of stark decline continued into the 1980s, with just 4.5 million admissions to the 135 screens that were still operating in 1985.

Since then, the arrival of multiplex chains, more favourable demographic trends and the savvy mass-marketing of a slew of blockbusters have combined to spur a revival.