Agency, whose clients include AIB, Tesco and Heinken, employs more than 150 people 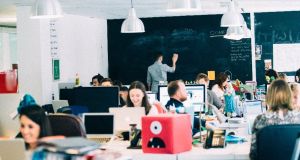 Irish advertising agency Rothco, whose clients include AIB, Heineken, Tesco, Lyons and Dublin Bus, has been acquired by Accenture for an undisclosed sum.

“Accenture Interactive is a hugely exciting brand to be a part of. It’s shown tremendous leadership in moving towards a new agency model, and we’re very excited to be part of that change,” said Mr Hickey.

Accenture Interactive, which is the world’s largest digital agency by revenue, has bought more than 20 agencies since it was established in 2009. The Rothco deal is the tenth acquisition made by the company this year.

“We’re delighted about welcoming such a talented group of creative professionals into the Accenture family. Rothco is a great fit for our business in Ireland. Dublin is not only an innovation and technology hub, it is a creative and cultural capital,” said country managing director Alastair Blair.

“Experience is the new battleground and we are creating new ways for our clients to engage with their customers. Once the acquisition is completed, more than 150 professionals from Rothco will join Accenture to help our clients innovate and lead in their markets,” he added.

Alongside its success in adding international accounts to its roster in recent years, Rothco has been notable for its wins at the prestigious Cannes Lions awards, which is a rare feat for an Irish agency.

In 2015, it won a bronze Lion for its “A Shred of Decency” pro-equality campaign for Dublin stationers’ Daintree Paper, which ran during the same-sex referendum.

In 2016, Rothco took home a silver Lion for the “Join Our Team” recruitment campaign for the Defence Forces that used data to target its advertisements at women who play contact team sports, believing them more likely to apply to join up and complete military training.

Rothco was also the creative agency behind AIB’s “The Toughest” campaign, which the bank used to revive its sponsorship of the GAA club football championships. Other clients in recent years have included Kerry Group, Hailo, Kodak and Rory McIlroy Inc.