Appointment of inspectors would be disproportionate and ‘damaging’, media group says 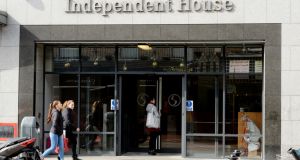 The bid by the State’s corporate watchdog to have inspectors appointed to Independent News and Media was “a bolt out of the blue” that was brought unfairly, INM counsel Paul Gallagher SC has told the High Court. Photograph: Alan Betson

Independent News & Media (INM) has a “very high standard” of corporate governance procedures and would have told the State’s corporate watchdog if he made it aware he had concerns in that regard, the High Court has been told.

Ian Drennan, the Director of Corporate Enforcement (ODCE), acted “very unfairly” in initiating a court application for the appointment of inspectors to INM without making INM aware earlier of his concerns about corporate governance and other issues, Paul Gallagher SC said.

Those issues arose from protected disclosures made by former INM chief executive Robert Pitt and chief financial officer Ryan Preston in 2016 and 2017.

Mr Gallagher said the ODCE application was based on a number of factual errors, including an assertion that INM’s first reaction to Mr Pitt’s disclosure was to terminate his employment.

The ODCE also failed over several months to give INM “critical” information in its possession concerning an alleged data breach at INM in 2014 and then unfairly criticised INM over its handling of the alleged data breach, he said.

That information included a spreadsheet with the names of 19 persons, including journalists, whose data may have been targeted when back-up tapes were removed from INM in October 2014 and accessed by third parties for what its then chairman Leslie Buckley had allegedly described as a “cost reduction” exercise.

Had INM been given that information earlier, it would have acted on it and made it known to the Data Protection Commissioner (DPC), Mr Gallagher said.

The ODCE application will only be heard if INM loses its judicial review.

Mr Drennan sought the appointment over concerns about the alleged data breach at INM and other issues arising from the protected disclosures made by Mr Pitt and Mr Preston.

The issues included a proposed purchase by INM of Newstalk Radio from Communicorp, a company of INM’s major shareholder, Denis O’Brien, and a proposed fee payment by INM to Island Capital, a company also linked to Mr O’Brien, neither of which proceeded.

Mr Drennan has said the range of “potentially unlawful conduct” that may have taken place within INM is “extensive” and an investigation by inspectors is necessary for reasons including to establish whether journalists emails or other data was accessed over a period from October 2014, by whom, for what purpose and whether Mr O’Brien benefited from that.

On Wednesday, Mr Gallagher said the “critical” issue is that the ODCE procedure began in January 2017, took 14 months and involved issuing 14 statutory requirements and requests under the Companies Act for minutes of meetings.

This process was “dictated entirely” by the ODCE in terms of the timeline, issues and information sought. When that process ended in March 2018, INM learned for the first time and with no prior warning, the ODCE had identified issues and concerns which he said required inspectors.

While the ODCE insists he has reached no “conclusions” on various issues raised in his application, the fact a regulator has expressed views and serious concerns about a range of matters, including about corporate governance at INM, was “immensely damaging” for a public company.

The consequences of such an application were foreseeable and the ODCE himself had acknowledged that, counsel said. The ODCE’s application has already inflicted very serious damage on INM, its share price and its reputation, he said.

An independent review established by the INM board into issues arising from the protected disclosures had found no wrongdoing on the part of INM but the ODCE did not appear to have taken account of that review, he said.

Had it been asked, INM would have said there was no need for inspectors given that review. If inspectors are appointed, further damage will be inflicted on INM which could also face the considerable costs of such an investigation and the prospect several of the issues raised may not be resolved.

All of this involved a serious impact on the company’s operations at a time when media companies are under severe stress because of changed market conditions.

INM maintains there was no breach of the Protected Disclosures Act, Market Abuse regulations, provisions of the Companies Act or principles of corporate governance and it is fully co-operating with the DPC probe into the alleged data breach.