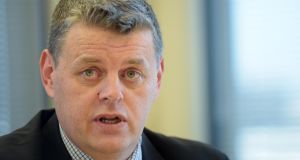 Independent News & Media (INM) has classified non-executive directors Allan Marshall and Triona Mullane as not being independent and provided details of significant financial connections between them and the media group and its largest shareholder, Denis O’Brien.

The company also revealed that Ms Mullane, Mr Marshall and Paul Connolly, another non-executive director, resigned from its remuneration committee on Wednesday.

On the same day, the group appointed fellow directors Terry Buckley and Jerome Kennedy in their stead to work alongside Len O’Hagan on this important committee.

In its annual report, published on Friday, INM revealed that Mr Marshall provided consultancy services to INM between 2013 and 2016 through a company called ComputerCall UK Ltd, from whom he received “additional remuneration”.

In relation to Ms Mullane, a company she co-founded called mAdme Technology Ltd received an investment of €280,000 for a minority shareholding from a company that was introduced by a relation of Mr O’Brien’s.

It also revealed that mAdme is set to receive about 6 per cent of its annual revenue for full year 2017 from Digicel, a telecoms company controlled by Mr O’Brien.

These revelations followed a review by Deloitte of each director’s independence in accordance with the 2014 UK corporate governance code.

This means Mr Buckley, Mr Kennedy and Mr O’Hagan are the only non-executive directors now classified as independent. As a result INM is no longer compliant with the code, which requires that at least half the board be independent.

The media company said this non-compliance would be addressed in the next four months.

In March, it emerged that Mr Pitt made a protected disclosure to the Office of the Director of Corporate Enforcement (ODCE) in relation to the possible acquisition by INM of Newstalk, the national radio station owned by Mr O’Brien, and “related matters”.

This led to a disagreement with INM’s chairman, Leslie Buckley, a long-time business associate of Mr O’Brien. A second disclosure by another senior employee has also been made to the ODCE.

Separately, the company has postponed its annual general meeting until August 23rd having originally scheduled it for May 31st. No reason was given for this change.

The annual report shows that Mr O’Brien owns 29.88 per cent of INM while IIU Nominees, which is connected with businessman Dermot Desmond, owns 15 per cent.