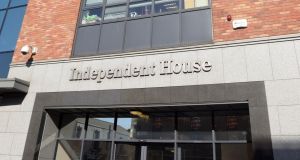 INM chief executive Michael Doorly said the results “clearly demonstrate the major challenges facing our group and our industry” and that a full review of operations would include exploring how it might charge for its digital content.

Mr Doorly said INM had no plans to close any of its print titles and would work to extend the life of them, but he also said the group would focus on winning the custom of a younger generation deemed more likely to pay for online subscriptions.

“I think a subscription model is what we’re looking at,” he said. “But before you start looking at charging for services, the service has to be pretty decent and it needs to have value.”

The INM veteran, who was promoted to the chief executive role last October, said the group had “work to do” to better understand some of its niche audiences. A strategic plan, prepared with the assistance of consultants EY, has been presented to the newly configured board of INM, but it is still “early days”, he added.

“Two to three years is the kind of time we will need to change the business.”

With advertising and circulation revenues expected to wane further in an industry facing multiple challenges, “we don’t have any longer”, Mr Doorly said.

In a 2017 marred by two profit warnings and events that led to the departure of Mr Doorly’s predecessor Robert Pitt, the publisher of the Irish Independent and Sunday Independent, among other titles, saw its pre-tax profit sink 31.8 per cent to €28.5 million, down from €41.8 million the previous year.

The company’s exceptional charges during the period included a €1.5 million severance payment to former chief executive Mr Pitt, who left the company following a falling out with former chairman Leslie Buckley. The dispute triggered an ongoing investigation into INM by the Office of the Director of Corporate Enforcement (ODCE).

“The group continues to comply with requirements from the ODCE and is taking all necessary steps to meet the ODCE’s requests,” it said.

Notwithstanding higher libel and legal costs, INM’s operating costs fell in the period, down 6.2 per cent to €265.5 million.

But total revenues at the group, in which Denis O’Brien is the single largest shareholder, dropped by 9.4 per cent to €293 million, with INM hit by declines across all of its major revenue categories. Advertising revenue was down 10.6 per cent, circulation revenues fell 8.4 per cent and distribution income was 9.5 per cent lower.

The outlook for 2018 was for more of the same, with “the domination of global platforms such as Facebook and Google” identified as a barrier to growth in its digital advertising revenues. INM’s overall digital revenues, at €15.1 million, grew just 1 per cent year-on-year in 2017, and only when a 53rd week in 2016 is taken out of the equation, with any gains coming from classified businesses such as CarsIreland.ie.

“Are we disappointed? Yes. Are we surprised? Absolutely not,” Mr Doorly said. “We can give out about Facebook and Google, but we can’t take them on and beat them, we have to find our own way.”

INM’s “own way” is likely to include efforts to monetise the US-based audience interested in Irish sport and other content, he indicated.

The group’s cash pile – which it had signalled in recent years that it would use to make media sector acquisitions – rose further in 2017, ending the year at €91.5 million, up €6.7 million year-on-year.

While Mr Doorly said INM was still in the market for “bolt-on” acquisitions and would seek to build its distribution business Newspread, some of this cash will be used to invest in its digital development. While there will still be ongoing efficiency reviews, investment rather than cost-cutting will become the theme of the business in the years ahead, he suggested.

The group incurred €1.8 million relating to restructuring costs (mainly redundancy payments) and acquisition-related expenses in 2017, though the highest exceptional charge was a €12.7 million non-cash impairment taken on the value of the Belfast Telegraph as a result of a “challenging” media market in the North.

But INM, which also owns the Sunday World, the Herald and 50 per cent of the Irish Daily Star as well as several regional titles, “believes in print”, Mr Doorly said. “All our titles make a contribution, so we’re not planning the closure of any titles.”

New chairman Murdoch Mac Lennan, who was installed in the role on Wednesday, replacing Mr Buckley, said he was “well aware” of the difficulties facing news and online publishers.

“While our group experienced difficult trading conditions over the course of 2017, I am confident that a robust development strategy is being put in place.”