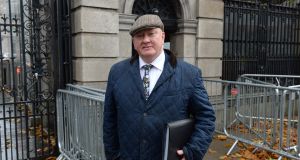 The Government has offered “precious little clarity” on how it will tackle the financial situation at RTÉ and made “no real recognition” of the “tsunami” engulfing the newspaper sector, the National Union of Journalists (NUJ) told the Oireachtas media committee on Wednesday.

NUJ Irish secretary Séamus Dooley said the union was “gravely concerned” for the future of public service broadcasting in Ireland and he also criticised the Government for ignoring the plight of the regional press and the difficulties facing freelance media workers throughout the Covid-19 crisis.

“Just to be clear, sentiment alone will not rescue the media,” Mr Dooley said.

While the Government has introduced specific schemes for tourism, hospitality and the arts, the only substantial, immediate measure to assist the media was the €2.5 million allocated through the broadcasting regulator to independent radio stations to cover the cost of Covid-19 output.

“There is only so long you can stretch an elastic band. It does eventually break,” said Mr Dooley.

The NUJ, which will meet the Minister for Media Catherine Martin next week, is seeking an “imaginative” stimulus package for the news media industry, which it says should be funded by a windfall tax of 6 per cent on tech giants.

An innovation fund should be established to promote public interest journalism at local and national level, developing the model used in the Simon Cumbers Media Fund established by Irish Aid, the NUJ said.

The trade union is also urging the Government to give vouchers to 18-19-year-olds and people aged 70 and over that can be used to pay for online or print media subscriptions.

“Praise alone won’t butter parsnips, folks, and that is something that we have to get clear to you. There is a crisis in the industry,” Mr Dooley said at the hearing.

Independent Broadcasters of Ireland (IBI) chairman John Purcell said the radio sector had “serious concerns” about the likely timeframe for action taken on foot of the Future of Media Commission’s recommendations, which are due next summer. Once measures to support Irish media are debated and passed through relevant committees, the Dáil and the Seanad, it will be “at least mid-2022” before reform is introduced.

“We have been talking about the decline of local radio and our business model, and television and local papers, for years now, but [Covid-19] has brought it to an acute phase, and nothing can be taken for granted for the future,” Mr Purcell said.

“I don’t want to be in a position where people say ‘remember when we used to have a two-hour talk programme on our local station in the mornings, but they couldn’t afford to keep it going anymore’. They are done with scant resources, as is.”

The IBI is also due to meet Ms Martin next week. It is seeking a second waiver of the broadcasting levy paid by radio stations, following a temporary waiver earlier this year. The permanent abolition of the levy has been promised to the sector since 2016.

RTÉ director of audience, channels and marketing Adrian Lynch, who also addressed the committee, highlighted a year of “extreme financial uncertainty” for the broadcaster. Although commercial revenues and income from the TV licence have “stabilised” in the fourth quarter, the outlook for 2021 remained unclear.

“Certain types of expenditure, such as commitments to major sporting events, have only been deferred, and this adds to the financial pressures of the year ahead. The toll of Brexit on the national economy, and commercial performance, is unknowable,” Mr Lynch said.

“The combination of a broken TV licence system and a precarious commercial environment exposes undeniable vulnerabilities for the national public service media.”

Mr Lynch said the original target of 200 redundancies at RTÉ under its cost-reduction plan had been reduced in order to protect its output.

“We just can’t afford to lose that many people, or else we are going to lose content.”

Some 73 people will leave RTÉ when the National Symphony Orchestra transfers to the National Concert Hall in 2021, while a voluntary exit scheme will open in January targeting a further 60-70 departures.

“Very stark presentations by all three of you here today,” said Niamh Smyth, the Fianna Fáil TD who chairs the committee.