Government should not ‘pander’ to RTÉ, rival Virgin tells Minister

Public funds should not be used for Fifa World Cup or Dancing with the Stars, it says 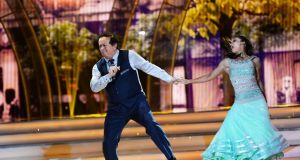 RTÉ broadcaster Marty Morrissey with professional partner Ksenia Zsikhotska in the 2018 series of Dancing with the Stars, a format Virgin Media Television says public money should not be used to buy. Photograph: Cyril Byrne

Any additional funding awarded to RTÉ in Budget 2020 will be a reward for inefficiency, Virgin Media Ireland has told the Government in a letter from chief executive Tony Hanway to Minister for Communications Richard Bruton.

“Virgin Media would strongly caution against the Government pandering yet again to RTÉ,” Mr Hanway has written.

The Virgin boss added that public money should not be used by RTÉ to acquire international sports rights or international television formats from abroad, citing Dancing with the Stars, the Uefa Champions League and the Fifa World Cup as examples.

The cable company, which owns RTÉ rival Virgin Media Television, has suggested to the Minister that RTÉ’s campaign to secure more money is “detracting from the key issue at hand”, which it described as “RTÉ’s inability to run a financially solvent organisation” despite its receipt of licence fee funds.

RTÉ should be held accountable for its losses, he said. “Instead, it seems RTÉ’s inefficiencies are, at best, ignored and, at worst, rewarded.”

The letter also laments the Government’s failure to attach any specific spending conditions to the €8.6 million given to RTÉ in last October’s budget.

This boost in funding was derived mainly from raising by €5 million the cap on the sum the Department of Employment Affairs and Social Protection pays the Department of Communications in respect of the free television licences. The rest of it was achieved by switching a further portion of TG4’s funding from the licence fee to direct exchequer funding.

Virgin Media said at the time that it would “seek clarification” about how the extra revenue would be spent.

“The continuing lack of clarity of what public money should be used for in broadcasting is a key policy issue to be addressed,” Mr Hanway has now written to Mr Bruton.

Last year’s budget allocation followed a Broadcasting Authority of Ireland (BAI) recommendation that its funding should increase by €30 million a year. It emerged recently that this had in turn followed a request from RTÉ for an annual funding increase of €55 million.

Mr Hanway said it was “interesting” that RTÉ’s losses were once again in the headlines in the run up to the next budget.

He drew attention to the pattern of deficits at the broadcaster. RTÉ’s €13 million deficit in 2018, when it received €189 million in licence fee income, was in large part attributed in its annual report to the cost of running RTÉ One and RTÉ2, “which suggests that when RTÉ is seeking an increase in funding, the additional funding is for these two services”.

Virgin argues that this distorts the market in which it competes, in part because the cost of international sport and format rights can be inflated by RTÉ’s bidding activity.

“Further, any commercial activities that RTÉ offers should not distort the market or create an unfair competitive advantage versus other players in the market.”

Virgin Media Television exceeds its own regulatory requirements for public service content and “sharing the financial burden of content demands” to a greater extent is the way forward, he said as he called for a “deeper policy examination”.

Mr Hanway sought a meeting with the Minister in a letter sent to him in relation to broadcasting legislation earlier this year. He reiterated the request in his new letter.

1 Michael Smurfit: ‘I asked Trump to invite me to the White House for my 80th birthday’
2 Ryanair expects air fares to fall when flights take off again
3 Household savings soar as consumers stop spending
4 Small businesses are cannon fodder in zealous anti-virus experiment
5 ‘I’m so lucky to be in the Caribbean – a million miles from Derry Girls’
6 Minister calls for EU to act against tobacco firms ‘undermining’ menthol ban
7 Consumers hesitant about travel as Covid-19 restrictions ease
8 Lioncor gets planning permission for ‘house of Europe’ project
9 Irish business of Carluccio’s restaurants to be wound up
10 Tax and the Pandemic Unemployment Payment: Your questions answered
Real news has value SUBSCRIBE