Government urged to focus on Irish companies, not just FDI 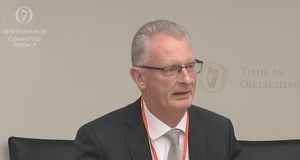 Ian Talbot of Chambers Ireland, which has called for revenues from carbon tax to be invested in green infrastructure

The Government should provide greater incentives for Irish companies in Budget 2020 rather than simply relying on foreign direct investment to fuel economic growth, Dublin Chamber has said.

Appearing before the Oireachtas Committee on Budgetary Spending, Dublin Chamber chief executive Mary Rose Burke said while the State must take steps to remain attractive to international investors, more should be done to bolster Irish companies.

“We need a broader industrial policy that cannot be summed up in the words “12.5%,” said Ms Burke.

“FDI is vital to the Irish economy, but as the global environment changes, so our business model must adapt, remaining attractive to international investors while also avoiding excessive reliance on a small number of highly mobile firms,” she added.

Dublin Chamber said the Government should show it is serious about competing with the UK, whose tax regime for entrepreneurs has greatly improved in recent years.

It called for the raising of the lifetime cap on qualifying gain for Capital Gains Tax (CGT)from €1 million to €15 million to send a “strong signal” that Ireland intends to compete with the UK ahead of Brexit.

“It is time for a step-change in terms of what the Government is doing to encourage and support indigenous enterprise and entrepreneurs. Irish entrepreneurs have had to look on enviously over the past decade as the UK has rolled out the red carpet for burgeoning business, with consistent tweaks and improvements to their tax regime,” said Ms Burke.

“Ireland has been too slow to react, resulting in our nearest neighbour - and biggest competitor - being allowed to steal a march. With Brexit on the horizon, it is vital that we react and fight back,” she added.

Dublin Chamber has also proposed changes to the R&D Tax Credit, the taxation of entrepreneurs’ dividends, and the key Employee Engagement Programme (KEEP), an inititiave that allows staff to pay a lower rate of tax on company shares.

The lobby group also urged the Government to use the State’s “rainy day fund” to ensure delivery of planned infrastructure improvements, something that is being considered by Minister for Finance Paschal Donohoe.

“We are conscious that Budget 2020 comes at a delicate time. But as the last budget beofe the UK’s exit from the EU, it offers an opportunity for Ireland to demonstrate serious intent about business competitiveness versus the UK, as well as its commitment to long-term planning for sustainable infrastructure investment and improved quality of life,” said Ms Burke.

Also appearing at the committee, Chambers Ireland also urged the Government to look beyond Brexit and focus on planning for the long-term. It called for revenues from carbon tax to be invested in green infrastructure.

“While the impact of Brexit requires significant attention, we must not lose sight of the longer-term challenges that Ireland will face in the years ahead,” said Ian Talbot, Chambers Ireland chief executive.