Newstalk, ‘haemorrhaging money’, has called time on its biggest star 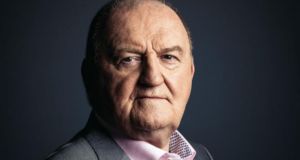 As demonstrations go it wasn’t particularly impressive. A dozen people stood on the narrow pavement outside Marconi House at noon on Thursday with banners calling for the removal of George Hook from the Newstalk airwaves. But the tiny turnout was the tip of a much larger iceberg, including women’s organisations, victim-support groups, politicians, media commentators and, crucially for Newstalk, advertisers.

Inside the building, on the third floor where the station’s studios and offices are located, the 76-year-old presenter was kicking off his two-hour show. Earlier he had again been meeting station managers as part of an ongoing process arising from his comments the previous Friday about blame and responsibility in the case of an alleged rape in the UK.

What exactly happened on Thursday is unclear. But the next morning the protesters got what they wanted. Newstalk issued a statement announcing that Hook had been suspended until the completion of the process, which it hoped would be reached next week. Sources at the station were tight-lipped, but the general indication was they don’t expect to hear Hook on Newstalk again.

His audience is only 100,000. Sponsors can just go and buy that audience somewhere else. But it’s been very damaging for Newstalk

“He’s gone. It’s over,” said one media insider with knowledge of the commercial pressures the station is facing. He said the decision by the hotel group Dalata to stop sponsoring Hook’s show was seen as a PR stunt, as “that deal was up in two weeks anyway”. But he said there had been a significant move by big advertisers as the week wore on to pull the plug. “You could really damage your business by advertising there,” he said. “The safest thing to do is stay away. His audience is only 100,000. You can just go and buy that audience somewhere else. But it’s been very damaging for Newstalk. They are haemorrhaging money.”

An employee, who asked not to be named, said staff morale was at an all-time low, a sentiment echoed by the former presenter Sarah Carey, whose Saturday-morning show was axed recently, during the second revamp of the schedule within a year. *Speaking on RTÉ Radio 1 on Friday, Carey said staff had been “bitterly let down by management” over the course of repeated rationalisations and rejigging of the schedules. “This crisis was foreseeable and avoidable,” she told Sean O’Rourke. “When you make controversy your business model, then this is inevitable.”

One of several unprecedented aspects of this week’s events was the internal revolt against management’s handling of the crisis. Up to 20 employees – about a third of the total staff – put their names to a letter criticising the company. “The longer George Hook remains on air, the more reputational damage this station will suffer, damage that will unfairly reflect on the hardworking and professional staff at Newstalk,” they wrote. The letter reflected widespread bitterness, directed not just at management but also at Hook, the station’s biggest star.

But I cannot bear how the Irish media/elites/virtues-signaling/anti-free-speech Left has treated a good and decent man like @ghook. https://t.co/XYI6Hox7yg

Hook came to broadcasting unusually late in life, achieving fame and a little notoriety in his late 50s as a contrarian rugby pundit on RTÉ, before the fledgling Newstalk took a punt on him to present its drive-time programme on its launch, in April 2002. In the 15 years that followed, presenters such as David McWilliams and Eamon Dunphy came and went from the perennially struggling station, but Hook remained ever-present.

Newstalk struggled to make a profit, but the “Hooky” persona, a brash saloon-bar controversialist with a distaste for political correctness and a lifetime’s worth of opinions to share, won more listeners than any other programme in the Newstalk schedules and seemed to offer a model for success.

Eamon Dunphy says he resisted pressure from Newstalk to provide a slot on his show for Hook’s American right-wing shock-jock guest, Michael Graham

But is controversy really a sustainable business model? Dunphy, who pioneered successful commercial talk radio in the 1990s, as presenter of The Last Word, on Today FM, says Hook’s remarks about rape were appalling. Dunphy disputes the suggestion of Mick Heaney, the Irish Times radio critic, that he himself was the first in a line of “floridly opinionated male broadcasters of a certain age”. The Last Word, Dunphy says, was “not that kind of radio at all. It was more cerebral. It gave time to subjects. The Last Word really didn’t generate controversy.”

Newstalk was different, Dunphy says. When he started presenting a weekend show on Newstalk, some years after leaving The Last Word, he resisted pressure from the station to provide a guest slot for Hook’s American right-wing “shock jock” guest, Michael Graham. (Graham indicated on Friday that he would no longer appear on Newstalk. “I cannot bear how the Irish media/elites/virtues-signaling/anti-free-speech Left has treated a good and decent man,” he also tweeted.)

Hook has been Newstalk’s biggest name and most colourfully bombastic personality for most of the station’s 15-year history. Remarkably, given his age, he remains a key part of the Newstalk brand. But this episode may come to be seen as a harbinger of changes in the medium-term media weather forecast. It is not a coincidence that the current controversy comes only a couple of weeks after Newstalk was criticised for doubling down on its already glaring gender imbalance, leaving it with only male hosts in every key slot from Monday to Friday.

It was almost as if the station had finally given up on attracting more female listeners. Within the industry some argue that such decisions are driven by research showing that both men and women prefer male rather than female voices on air and that news-centred talk radio does not appeal to women. “That’s hogwash,” says Margaret E Ward, founder of Women on Air, which works for more equal gender representation in broadcast media. Ward says there is no data to support these claims, but they persist as urban myths within the industry. “Every time you ask to see the research they say it’s commercially sensitive or it’s just something that everyone knows to be true.”

On radio the presenter has a vital role to play in keeping the show within the rails of what is safe and legal, not least in the words that come out of their own mouth

Some have compared this controversy to the recent firing of the columnist Kevin Myers from the Sunday Times. But live radio is a very different beast from print, not least because there’s no safety net. In theory a newspaper has layers of editors to guard against errors. On radio the presenter has a vital role to play in keeping the show within the rails of what is safe and legal, not least in the words that come out of their own mouth. If you build your schedule around big personalities and off-the-cuff philosophising, don’t be surprised if things go horribly wrong from time to time. “Radio as a medium is immediate,” says Dunphy. “If it’s in your head there’s always a chance you might say it – sexism, racism . . . I didn’t have that bile.”

And individual newspaper columnists don’t generally come with their own sponsorship deals attached, or with ad rates tied to their popularity. Commercial radio is wholly dependent on advertising and sponsorship, and tends to market its stars as stand-alone products to commercial sponsors. If the star’s image turns sour the sponsors get edgy. If the station is in financial difficulty the pressure is far worse. And with the immediacy of social media a crisis can spin out of control within minutes rather than days. Whatever their views on this particular case – and quite a few in the media believe Hook has been unfairly hounded off the air – other media companies will nervously take note of how this story is playing out.