For RTÉ, some commitments are simply proving too big 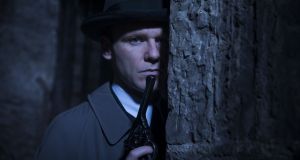 Resistance, starring Brian Gleeson, was one of the few post-watershed dramas on RTÉ One in 2019, a year in which RTÉ did not meet its own audience target on drama.

‘Commitment not achieved” is what I say to myself each lockdown evening as I review my daily to-do list and realise that I have once again neglected to appreciate nature or learn Italian. Coincidentally, the phrase also pops up seven times in the RTÉ annual report published last week.

In 2019, the year it covers, RTÉ indicated that it failed to meet seven target measures. This is admittedly much lower than the 26 times it declared “commitment achieved” or “commitment largely achieved”, but it still makes for a downbeat expression of accountability – a sort of public-sector exercise in flagellation, albeit one that begins only on page 156.

The “commitment not achieved” line reflects, in the main, instances where a chunk of the audience feels the public-service broadcaster has not quite excelled. For example, RTÉ’s target was to maintain public perception that it has high-quality content and services at greater than 75 per cent. Alas, only 68 per cent of Irish adults surveyed on its behalf agreed.

Another missed target relates to children’s programming. While more than half of the surveyed audience agreed that “RTÉ devotes the right amount of time to children’s programmes”, the more specific target of maintaining the weekly reach of RTÉjr among four- to seven-year-olds above a modest 13 per cent was not achieved. The weekly reach of RTÉjr was just 10.7 per cent of children in this age group, a figure that must surely have been lifted since by the pandemic.

The four remaining unmet goals fall under the umbrella commitment to “celebrate diversity and cultivate Irish talent”. Some 73 per cent of adults agreed that RTÉ reflects current Irish society, shy of the 80 per cent target, while 57 per cent agreed that RTÉ has “a range of new faces and voices on air”, short of a 62 per cent target.

These performance commitments don’t exist for the hell of it, but were set as part of a statutory five-year review submitted by RTÉ to the Broadcasting Authority of Ireland and the minister.

RTÉ spent a good deal of 2019 – a year in which it narrowed its annual deficit from €13 million to €7.2 million – stressing that it didn’t have enough money to meet its public-service commitments, so its inability to do so in key areas such as drama, culture, news and children’s programming could, in a kind light, be considered illustrative of its point.

It offers its own synopsis of why it happened and what it is going to do about it: “RTÉ’s audience consumption figures for 2019 were strong, however in the second half of the year many of the audience perception figures dipped considerably. While media coverage about RTÉ may have negatively influenced audience perception in late 2019, RTÉ intends to strengthen its relationship with audience by delivering on its revised strategy from 2020 onwards.”

Although the annual report doesn’t specify the exact media coverage that might have “negatively influenced” what the audience thinks, in late 2019 there was a spate of headlines about its unhappy plan to move Lyric FM out of Limerick to save money. This was one of the flagged cost-cutting proposals that was abandoned after the Government pledged more financial support.

Now the revised strategy is meant to be stabilising RTÉ’s finances, with its measures expected to cut costs by €60 million before 2024. But the strategy also has the apparent ambition to deliver “a new blend of complementary live and on-demand services, offering audiences compelling and varied content, at times and on devices that suit them”. (Insert your personal RTÉ Player-related gripes here.)

How it can do this convincingly without a miraculous injection of many millions remains a mystery. Even if the cutbacks were to be concentrated on personnel costs (which accounted for €175.8 million of the broadcaster’s €337.8 million operating costs in 2019), and managed to avoid visibly hurting output, the task of “renewing RTÉ for the next generation” while continuing to cater for the loyal older audience will be daunting and difficult. My chances of mastering Italian are probably higher.

None of those audience perception dips happened in a vacuum. The context of a report card sprinkled with “commitment not achieved” verdicts is not just what RTÉ isn’t doing, but what global media giants are.

Take the finding on drama. The public knows what it is talking about here: 2019 was an especially light year for post-watershed drama on RTÉ One, with pretty much nothing of note on air between the five-part mini-series Resistance in January 2019 and the autumn arrival of the hilariously mad Dublin Murders, which originated at the BBC and was first broadcast on BBC One. In the age of “peak TV”, these absences jump out.

Perhaps the success of RTÉ’s acquisition of Normal People, another BBC project, will have helped improve audience perceptions in 2020. But in order to rate RTÉ One “good for Irish drama”, viewers first have to seek it out. With the volume of compelling and varied content from streaming services and a plethora of other rivals off the charts, the distractions have never been in larger supply.