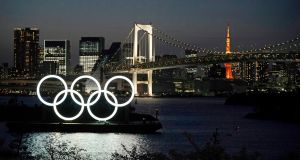 The Olympic rings monument at Odaiba Marine Park in Tokyo in March 2020, the month in which organisers agreed to postpone the games until 2021. Photograph: Franck Robichon/EPA

Irish television advertising revenues will grow 5 per cent next year, supported by economic recovery and the return of sporting events, according to forecasts by IPG Mediabrands Ireland.

The media agency said the holding of the Tokyo Olympic Games and in particular the UEFA European Championship – in which Dublin is one of 12 host cities – would boost television ad sales after a difficult 2020 for the Irish advertising market as a whole.

While 2020 was not widely predicted to be a stellar year for television advertising despite the original expectation that the Olympics and Euro 2020 would take place, the Covid-19 pandemic meant it was significantly rougher than expected.

IPG Mediabrands research points to a 10 per cent decline in overall Irish advertising activity in 2020, but even this performance is flattered by “resilient” digital advertising.

Television ad sales are estimated to have dropped 18 per cent, whittling the size of the Irish television market down to €170 million and leaving broadcasters some €40 million worse off compared to 2019.

This decline tallies with public statements by Virgin Media Television that its ad revenues will be about 20 per cent lower this year as a result of Covid-19, with an uptick since October only partially offsetting a stark pause in advertising activity in the second quarter.

Virgin’s managing director Paul Farrell indicated to the Oireachtas media committee earlier this month that the broadcaster was anticipating “somewhat of a bounce” in 2021, but that this would be a blip in the prevailing trend of structural decline in traditional media.

Many major advertisers cancelled or deferred their marketing budgets in the early months of the pandemic, which saw the cancellation of both Tokyo 2020 and the Euros and also brought the rescheduling of other key sporting events that bring in advertisers, including the remaining Six Nations and UEFA Champions League fixtures.

The trough came in the second quarter when television ad sales were running 40 per cent lower compared to the same period in 2019.

Eamon Fitzpatrick, managing director of IPG Mediabrands Ireland, said it expected investment in digital advertising in the Irish market to power ahead once more next year, having managed about 3 per cent growth in 2020.

Total ad sales will rise 8.4 per cent to €1.3 billion in 2021, IPG Mediabrands estimates, with all media formats expected to see some rise compared to their 2020 fortunes. Within this, out-of-home advertising revenues, which like those of television tend to do well in years with major sporting events, are forecast to grow 8 per cent.

This follows a 35 per cent decline in out-of-home revenues this year as urban footfall evaporated, shops and hospitality businesses were closed and commuters stayed at home. Meanwhile, IPG estimates that print revenues dropped 32 per cent in 2020, with radio ad sales down 19 per cent.