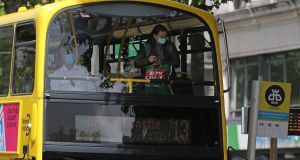 Developer Johnny Ronan’s company is seeking a meeting with Minister for Housing Darragh O’Brien after continually failing to secure planning permission for additional storeys for a number of Dublin docklands projects, according to the Business Post. His Ronan Group has written to the Minister asking him to intervene in its dispute with Dublin City Council over building height restrictions. The group has lost a series of battles with the council in the High Court over the local authority’s interpretation of planning guidelines.

The Business Post also reports that Dublin Bus is considering a number of alternative services, including an e-scooter hire scheme as it looks to diversify after a difficult year in 2020. Chief executive Ray Coyne said the company’s commercial wing, which operates among other things, bus tours, is looking to roll out new services as it looks to recover from a dramatic decline in revenues. The commercial wing had been “decimated” in 2020, Mr Coyne said.

Profits at Supermac’s rose by more than €17 million to nearly €190 million in 2019, but are expected to be significantly lower for last year and into early 2021, the Business Post says. Founder Pat McDonagh said turnover rose from €172.2 million to €189.4 million in 2019, with an increase in trading across all parts of the business. Sales through restaurants were up by €5 million, while motorway plazas were up by €7.5 million, and the hotel side of the business by €4.6 million.

Workhuman to expand Irish base

Workhuman, the Irish tech company that achieved unicorn status last year with a $1.2 billion valuation, is aiming to double its headcount here to 800 people by 2023, according to the Sunday Independent. Company chief executive and co-founder Eric Mosley said it is opening a second building in Dublin shortly that will give it an additional 200 seats.

The Sunday Independent also reports that the Department of Social Protection is reviewing more than 2,000 backdated claims by Aer Lingus staff to see if they were entitled to welfare support over the summer after the carrier cut wages. Staying with aviation and the paper says DAA, the semi-state company that runs Dublin and Cork airports, is seeking an operator to provide bussing services from its car parks in a contract that could be worth €30 million.

The Sunday Times Irish edition says DunPort Capital Management has emerged as the dominant backer of the rescue of Cara Pharmacy, only a few months after it applied to have the chain placed into examinership. Renrew, a new company seeking to takeover Cara from its current owners, Ramona and Canice McNicholas, is to be funded with a €1.3 million equity injection from its main shareholder, Lanely, and debt from DunPort.

A company in which solicitor and developer Noel Smyth is a director, is seeking to fast-track plans for build-to-rent apartments at a car park behind St Michael’s Hospital in Dún Laoghaire in south Dublin, according to the Sunday Times. It says Fitzwilliam DL Ltd last month applied to An Bord Pleanála for permission to build a strategic housing development at the site on Crofton Road near the town’s seafront. The scheme would require the demolition of an existing two-storey building to make way for 102 apartments in two blocks, one extending to 13 storeys and the other nine.