Conversation about BBC’s future will sound familiar to RTÉ watchers

Who would want to be director-general of a public service broadcaster now? 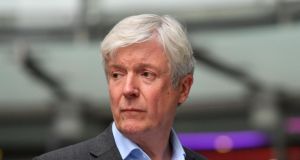 BBC director-general Tony Hall, who announced earlier in January that he is leaving the role. Photograph: Ben Stansall / AFP

Which much-scrutinised public service broadcaster was this said about? “People want it to be smaller, but they also want to keep the bits they like.”

How about this one? “The news is at the very, very heart of this argument… the politicians are going for the jugular always and always have done.”

Or this internal assessment? “We must and can never stand still. We have to keep adapting, reforming and leading. Our values are timeless, but the need for constant change is ever-present.”

They could be about RTÉ. In fact, they all refer to the BBC, which is now searching for its next director-general while also making a string of cuts thanks to an unfavourable licence fee settlement with the Cameron government.

The conversation about the BBC and RTÉ in their respective home countries has had so many parallels of late, we could play the “which broadcaster?” game forever.

For the record, the lines above are from, respectively, an anonymous ex-BBC executive quoted in the Guardian, veteran current affairs presenter David Dimbleby and outgoing BBC director-general Tony Hall.

At the BBC, everything is bigger than at RTÉ: the budgets certainly, the employee count is 12 times higher and the revenues are 17 times greater. But both broadcasters endure many of the same threats, or what are more gently referred to as “challenges”. Both must contend with the rise of the subscription video-on-demand market and what this means for their own futures.

Both broadcasters have also received the sort of treatment from Governments that could easily be interpreted as a concerted, twin-pronged undermining of their reputations and funding models. Both have found it hard to defend themselves or made a mess of doing so.

Who would want to be the director-general of such an organisation? That question is now being asked in Britain, where Hall has signalled he will step down this summer for the presumably less stressful position of chairman of the UK’s National Gallery.

Hall, who inherited the BBC gig at the height of the Jimmy Savile scandal that cost George Entwistle his job after an ugly 54 days, is said to be leaving now so the task of selecting his replacement falls to the current chairman of the BBC, David Clementi. Wait much longer and it will be Boris Johnson’s pick to succeed Clementi who runs the recruitment process.

The accompanying suggestion is that Downing Street will take a dim view of candidates perceived to be left-wing, such as BBC director of radio James Purnell, a former Labour minister in the Brown government.

But perhaps any BBC director-general will find his or her tenure a difficult one to sustain in the Johnson age if the organisation’s journalists dare to hold his government to account or even look at senior Tories the wrong way.

Having outplayed the BBC by swerving an interview with its number one Rottweiler Andrew Neil to apparently no electoral cost at all, Johnson is well-placed to win further battles with the Beeb. If he wants to destroy it, or neuter it, or throw around accusations of bias whenever it reports on something he doesn’t like, he probably can.

Past Irish governments took inspiration from the 98-year-old BBC when they set up RTÉ. It would be nice if the next one could refrain from copying the dangerous example Britain now provides.

After the election, change will come to RTÉ, if only because the terms of most of its board members have recently expired or are due to do so in February. The next minister for communications and the next Oireachtas communications committee, which gets to nominate four appointees to the RTÉ board, will have to address the issue of board renewal at some point.

Moya Doherty’s second term as chair of RTÉ runs until November 2022, however, and if RTÉ director-general Dee Forbes stays for the full seven years, which she might not, she will be in office until July 2023. The question will be relevant whatever the precise timing: who would want to lead a public service broadcaster in the 2020s?

Of course, the director-general position is massively well-remunerated – Forbes receives a salary of €250,000, a car allowance of €25,000 and pension contributions of €63,000 – and still comes with enough prestige to balance out the flak.

But it requires, first and foremost, the desire and aptitude to tango endlessly with politicians on the subject of licence fee reform.

Some election outcomes may seem more favourable to RTÉ than others, but even parties less ideologically antagonistic to Montrose than Fine Gael, which is almost all of them, won’t necessarily want to spend money on the place.

We have been here before. Over the decades, both RTÉ and the BBC have had major run-ins with the governments of the day that have threatened their independence and forced them into a period of cowed caution.

This time, political antipathy, or at best indifference, coincides with an even fiercer headache. The same revolution in viewing habits that fuels licence fee objections such as “but I don’t watch television” and “Netflix is cheaper” is unlikely to be winded anytime soon. Figuring out how a single-nation broadcaster can convincingly participate in the global streaming market will be no mean feat – fail and the job becomes a miserable exercise in managing decline.

1 How much state pension will I get next year?
2 Housing crisis here to stay in absence of big rethink, industry warns
3 Up or down – how much is your Local Property Tax this year?
4 PTSB plays down Ulster Bank talk as it sells €1.4bn of loans
5 Am I crazy to consider switching to an Ulster Bank mortgage?
6 Irish tech company Asavie acquired by Nasdaq-listed Akamai
7 Brexit to curb services trade with UK, accountants group warns
8 How long can Government afford to keep State pension age at 66?
9 Ghost newspapers and zombie brands are stalking the media
10 EU bank watchdog may need to revisit payment breaks
Real news has value SUBSCRIBE