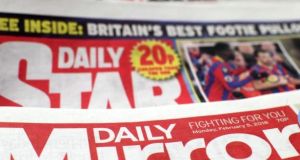 Reach reported a 5.4 per cent rise in operating profit to €182.5 million. Photograph: PA

Reach, the owner of UK tabloid newspaper titles, the Mirror and the Express, aims to increase its registered users to seven million by the end of 2022 to help secure the future of its British newspapers.

With 47 million people accessing its national and regional content, Reach, formerly known as Trinity Mirror, had one of the biggest digital and print audiences in Britain but was not monetising this effectively, chief executive Jim Mullen said on Monday.

At the end of 2019, only 2 per cent of Reach’s online users were registered, against the likes of Google, Facebook, Amazon and Microsoft, which had registered more than 90 per cent, he added.

Registered users can be targeted more effectively by advertisers and they can be served content that is relevant to them, increasing the time they engage with the company.

Mr Mullen said Reach had not previously asked readers for consent to use their data. “It was all about scale and reach, and there was nothing wrong with that, but we need more.”