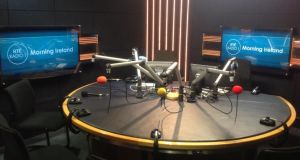 Morning Ireland has extended its lead as Ireland’s most popular radio programme. The Radio 1 breakfast programme now has a listenership of 429,000, adding 5,000 since the last published audience survey, though its tally remains 5,000 lower than it was a year ago.

Liveline, which saw its listenership overtaken by Marian Finucane’s Saturday show earlier this year, reclaimed second spot after it lost fewer listeners than Finucane. The Joe Duffy afternoon phone-in now has 363,000 listeners on Radio 1, down 9,000 since the last survey and 11,000 year-on-year, according to the Joint National Listenership Research (JNLR) figures for the 12 months from October 2018 to the end of September 2019.

But after recording gains in market share in the previous survey, it was a more lacklustre set of figures overall for both Radio 1 and Communicorp’s two national stations Newstalk and Today FM, while RTÉ 2fm’s market share softened again.

Head of Radio 1 Tom McGuire described the latest figures as “middle-of-the-road” for the station, although its market share, at 22 per cent, has only slipped fractionally from 22.1 per cent.

Mr McGuire highlighted possible “Brexit fatigue” over the summer as the explanation for drops in some of Radio 1’s news and current affairs audiences. An Irish general election would help reverse this trend, he added.

Many of the gains and losses for individual shows were within the margin of error, and there were few obvious winners overall.

On Newstalk, the recent listenership surge for drivetime presenter Ivan Yates came to an end, with the audience for his Hard Shoulder programme, the biggest on the station, slipping 1,000 to 182,000. However, this is still up 25,000 year-on-year.

Patricia Monahan, Newstalk’s managing editor, said Newstalk was “delighted to retain our position as the second most listened-to station in Ireland”.

Both Newstalk and Today FM saw some slippage in its weekday afternoon slots. The listenership of Today FM’s lunchtime programme was 89,000, down 7,000 since the last survey and 16,000 year-on-year. Mairéad Ronan took over the slot in September, with most of the survey period relating the audience of its previous presenter, Muireann O’Connell.

On 2fm, the most encouraging number was at breakfast time, with the new show presented by Doireann Garrihy and Eoghan McDermott calculated to have 135,000 listeners, up 2,000 since the last survey. The slot shifted one hour earlier in June as part of a broader restructuring of the 2fm schedule.

Head of 2fm Dan Healy highlighted the station’s growing share of 15-34-year-old listeners, although he noted that the absolute number of radio listeners in this age segment is falling.

The station plans to film more of its programmes in future, he confirmed, following an experiment that saw the breakfast show with Garrihy and stand-in host Greg O’Shea streamed live on the RTÉ Player late last month.

“We have to be where the audience is,” Mr Healy said.

The Choose Radio Group, which represents the industry to advertisers, said the JNLR showed that radio remained the “audio medium of choice” with an 85 per cent share of listening, compared with 7.8 per cent for own music, 5.6 per cent for Spotify and 1.1 per cent for podcasts.

Some 81 per cent of people listen to the radio on an average day, according to the JNLR, for which research firm Ipsos MRBI interviewed more than 16,000 people.

In Cork, Wireless’s 96FM declined, but C103 recovered some share, while Red FM, in which The Irish Times has a minority stake, held steady with a 23.4 per cent market share.

WLR FM, which is majority owned by The Irish Times, saw its share of listening in Waterford rise to 45.2 per cent, while youth station Beat 102 103, also part of The Irish Times group, rose to a 15.9 per cent share in the south east.

Donegal’s Highland Radio remains the local station with the largest market share in its licence area at 65.5 per cent.