May endures torrid week but lives to fight another day 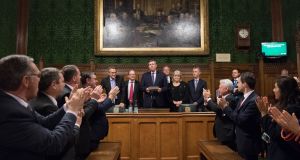 The House of Commons erupted into laughter this week as British prime minister Theresa May – who had only been on her feet a matter of seconds – told the house she had “listened very carefully” to what had been said during five days of debate on her Brexit deal.

She took a moment for order to restore itself before continuing with what must have been a most unpleasant task.

“From listening to those views,” she said. “It is clear to me that, while there is broad support for many of the key aspects of the deal, on one issue – the Northern Ireland backstop – there remains widespread and deep concern.

“As a result, if we went ahead and had the vote tomorrow, the deal would be rejected by a significant margin.” With that, May postponed the vote but set in train a sequence of events that will ultimately lead to the end of her stewardship of the Conservative Party.

The climbdown prompted enough of her party colleagues to write to Graham Brady, chairman of the 1922 committee, to trigger a vote of no confidence in her leadership. May then cancelled a trip to Dublin to fight for her political future.

It was a fight she ultimately won – but at a cost. “In my heart I would have loved to have led us into the next election,” she said. “But I realise that we will need a new leader with new objectives for the 2022 election.”

Loud banging of tables could be heard from outside the room as May made her pitch to party members. Hours later, the noise was even louder as Brady announced that May had survived, winning the poll by 200 votes to 117.

It was then back to the task at hand and on to Brussels. May promised MPs she would find a “legally binding” solution to the backstop that would satisfy the DUP, but – once again – the EU 27 held the line.

They rejected her plea to redefine the backstop, insisting the guarantee of no hard border in Ireland could not be renegotiated. An impatient Jean Claude Juncker said it would be up to the UK to “say what they want” rather than wait for EU solutions, leaving May caught between the devil and the deep blue sea.

Earlier in the week, the EU’s top court found that the UK could unilaterally change its mind and withdraw its article 50 application to leave the European Union. It was previously thought that all member states would have to support the move.

Meanwhile, preparations for a chaotic Brexit are continuing. Fianna Fáil leader Micheál Martin said “all bets are off” if that happens, and that his party would back an emergency budget.

Independent News & Media (INM) chief executive Michael Doorly brought staff at the embattled media giant together this week to fill them in on what he described as “just unbelievable” allegations.

The meeting was called after a report in the Sunday Business Post said Derek Mizak, a cybersecurity expert, was engaged by the company’s former chief Robert Pitt in 2015 to examine senior editors’ computers to find the source of a leak to the Phoenix magazine.

The report claimed that computer hard drives of up to six editors at the newspaper group were taken by the company at night and copied without their knowledge. Doorly told staff he would “hate to think that a CEO would have done this”.

INM is already the subject of an investigation by High Court inspectors and the Data Protection Commission into allegations that INM emails were accessed by Mizak in a separate incident linked to former chairman Leslie Buckley in 2014.

That followed a protected disclosure from Pitt alleging that Buckley had pressured executives to pay an inflated price for radio station Newstalk, which had been put up for sale by its owner, Denis O’Brien, who is also INM’s biggest shareholder.

The inspectors are investigating the Newstalk allegation and a range of other matters, including a suspected major data breach that included journalists’ emails. Buckley has denied any wrongdoing and said he will “fully and robustly” defend himself.

Doorly has now requested that the High Court inspectors also examine the 2015 incident, while he pledged to revive an “editorial systems committee” as it looks to allay the concerns of staff.

There really is never a dull moment at INM. It then confirmed that Ryan Preston, its chief financial officer, is to leave the group at the end of January. Preston was in situ when Pitt made his protected disclosure and rowed in behind him at the time.

Construction companies have been lamenting a skills shortage in recent months, apparently unable to find the personnel to fill the key roles needed to build the homes the State is desperately crying out for.

In a recent report, the Economic and Social Research Institute said the State would need an influx of foreign workers to meet housing targets, warning that this may add to rental pressures and housing demand in the short term.

That being said, Irish construction activity accelerated in November amid a sharp pick-up in housing construction, according to the latest snapshot of the industry from Ulster Bank, which said the increase was down to previously delayed projects starting up.

For one thing, developer Hines and financial backer APG Asset Management are eyeing major sites in Dublin as they prepare to spend €1.1 billion on building 3,000 apartments in the city.