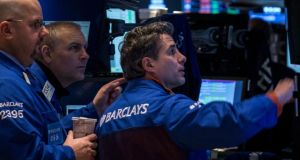 World stocks edged up from this week’s four-month lows in cautious trade ahead of a euro zone monetary policy decision later today, supported by relative calm in vulnerable emerging markets.

The euro was slightly weaker as some investors bet that the European Central Bank could surprise markets with another interest rate cut to ward off the threat of deflation after last month’s unexpectedly soft inflation reading.

The broad consensus is that there will be no change in the bank’s record low benchmark rate of 0.25 per cent. “Investors have started to position for either a dovish ECB or ... for some sort of surprise (easing),” said Luca Cazzulani, UniCredit rate strategist in Milan.

The MSCI world equity index rose 0.4 per cent, while European stocks followed Asia higher by gaining more than 1 per cent.

US stock futures were pointing to a firmer start on Wall Street later. Relative calm in the capital-hungry emerging markets of Turkey, South Africa and India also lifted developing stocks, after a rout that drove safe-haven bids to US Treasuries and the yen. Emerging stocks rebounded 0.7 per cent from this week’s five-month lows while the Turkish lira and South African rand held above recent lows.

The banking sector is in the spotlight after Credit Suisse missed expectations with a marginal uptick in fourth-quarter net profit, and its shares were down more than 2 percent.

The euro was down slightly on the day at $1.3522 and 137.14 yen. The dollar rose 0.1 percent against a basket of major currencies. German bond futures were broadly steady. The

ECB is due to announce its decision at 12.45pm. Some investors also speculate it could suspend its sterilisation programme - operations to soak up money brought into circulation by the ECB’s crisis-era purchases of euro zone government debt.

At a minimum, investors expect ECB chief Mario Draghi to drop hints of his readiness to ease, which could help counter worries about dwindling stimulus from the Federal Reserve.

1 Revenue accused of harassing businesses over Covid wage subsidy scheme
2 Johnny Ronan loses out on €315m Dublin docklands deal
3 How long can Government afford to keep State pension age at 66?
4 Give your home a smart makeover with some clever appliances
5 Apple iPhone 12 Pro: Well worth the wait
6 PTSB’s €1.4bn sale is a sign it is preparing for a fresh loans crisis
7 Ryanair and Aer Lingus to cut further flights from regional airports
8 Nearly 12% living in jobless households as result of pandemic
9 Grafton Street landlord cuts high street property values by 26%
10 Can Big Tech’s backing install Biden in the White House?
Real news has value SUBSCRIBE