World stocks climb to three-month highs despite US unrest 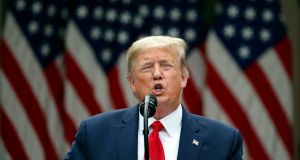 World stocks climbed to three-month highs on Tuesday as the global coronavirus recovery effort won out over US-China tensions and the worst civil unrest in the United States in decades.

It was a quieter day for the Irish market, as Euronext Dublin finished Tuesday up just under 1 per cent, while there were positive signs for the hotel sector as fears over the coronavirus pandemic continue to ease.

Dalata, the biggest hotel operator in Ireland, grew its share price by 6 per cent, with the company was building on positive momentum in the sector.

It was a mixed day for Irish banks, with AIB up 2 per cent, while Bank of Ireland finished the day down 2 per cent.

In aviation, Ryanair was up 2 per cent, but it underperformed relative to industry rivals with Easyjet gaining 3 per cent, and Aer Lingus parent International Airline Group adding 3.5 per cent to its share price.

There was less positive news for food groups, with Greencore down 2.5 per cent, while Kerry Group shed just over 1 per cent.

Meanwhile, building materials company CRH finished the day up 2 per cent, with traders noting that the sector was benefiting from hopes of increased levels of construction in the United States following a stimulus package.

Elsewhere, Paddy Power Betfair owner Flutter Entertainment was up 2 per cent at close of business.

UK shares ended at near three-month highs amid continued bets on government stimulus and easing lockdowns helping a swifter economic recovery from the coronavirus crisis.

The blue-chip Ftse 100 and the domestically focused mid-cap Ftse 250 each added 0.9 per cent, with both indexes ending at their highest levels since early-March.

The Ftse 100 was propped up by resource heavyweights BP and BHP Group as commodity prices rose on the prospect of increased demand and – in the case of oil – more Opec production cuts.

EasyJet rose 2.6 per cent, while cruise operator Carnival fell 1 per cent, with both stocks likely to lose their place in the Ftse 100 after the Covid-19 crisis knocked the value of their shares to below the index’s required threshold.

European shares got back on track as the Stoxx 600 jumped over 2 per cent and Germany’s Dax surged nearly 4 per cent after a holiday on Monday as Lufthansa’s board approved its government bailout and car makers shone.

Volkswagen, Daimler and BMW shares all rose more than 6 per cent on talk of a €5 billion government-funded car buying scheme.

The euro hit a 2½-month high too as the dollar struggled with its home-grown strains, and Italian and Spanish bonds were still being helped by a proposed €750 billion EU stimulus plan and European Central Bank buying.

“In a way, it is remarkable that the market remains in this positive mood,” said Elwin de Groot, head of macro strategy at Rabobank. “Even with these rising protests in the US and the situation in Hong Kong at the moment, the market is pushing on and seeing room for optimism.”

The S&P 500 and the Dow Jones indexes hit three-month highs as optimism about the reopening of the economy after weeks of lockdowns countered concern over more disruptions from the street protests that have spread across the country.

Improving economic data, trillions of dollars in stimulus and the restarting of businesses have helped the benchmark S&P 500 recover about 40 per cent from its March lows, leaving it only about 10 per cent below a record high hit in mid-February.

Technology-focused companies, including Amazon, Facebook and Apple, which have led the market recovery, were marginally lower on Tuesday.

Shares of Western Union jumped 11.1 per cent after a report the money transfer company had made an offer to buy its smaller rival MoneyGram International, which saw its shares soar 33.6 per cent. – Additional reporting: Agencies