US stocks gain amid optimism that global economy is rebounding 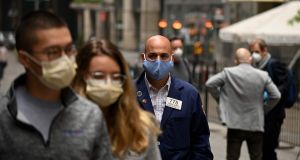 European stocks surged on Wednesday after a report the European Commission wants to mobilise a bigger-than-expected €750 billion for the post-coronavirus economic recovery, while Wall Street also advanced.

US stocks rose in early trading as optimism mounted that the global economy is on the rebound from the pandemic hit. For a second day, stocks most punished by the coronavirus, from Carnival to United Airlines, surged as investors anticipate a sharp uptick in spending on non-essential goods and services.

The tech-heavy Nasdaq 100 Index retreated as investors shunned the high flyers that dragged equities off their lows throughout April and much of May. Rising tensions with China also weighed on chipmakers.

Banking-heavy bourses of Spain and Italy initially rallied 2.4 per cent and 1.4 per cent respectively after a senior EU official said the commission would propose that Italy and Spain get the lion’s share of the new recovery fund offering a mix of grants and loans. Italian stocks later slid back into negative territory.

“The size of the market reaction is relatively modest if you compare it to the plan itself, but that is because there were quite some expectations in the market,” said Elwin de Groot, head of macro strategy at Rabobank.

Aside from banks, other hard-hit sectors including travel and leisure and automakers rallied. The easing of lockdowns in many European countries and improving economic data have spurred buying in the growth-exposed cyclical sectors in recent weeks, putting European stocks on course for a modest 3.3 per cent gain in May.

“European investors are really focusing on the reopening and that’s gathering some momentum,” said Ian Williams, strategist at Peel Hunt.

“With the cyclicals, the most extreme risks seem to have been priced in and people are looking for some cheaper opportunities.”

The latest updates helped investors look past fresh protests in Hong Kong over new national security laws proposed by Beijing and US president Donald Trump’s warning of a strong response to China’s move by this week.

Automakers were boosted by an 16.5 per cent surge in French carmaker Renault after it and Nissan Motor announced steps in a wide-ranging revamp of their partnership to slash costs and survive. Chipmaker Infineon Technologies dipped 5.5 per cent after it raised about €1.06 billion by issuing new shares. – Reuters / Bloomberg

1 ‘Saudi Arabia is where the opportunities will happen in future’
2 Rural broadband: Full list of high-speed internet hubs
3 Thousands of AIB customers to receive refunds following decision on tracker case
4 Trump’s TikTok move may have far-reaching consequences
5 Apple and Samsung announce unthinkable partnership
6 How real is the threat of cyberterrorism?
7 Give up the day job or save for a holiday with AirBnB and other nixers
8 World’s most renowned hacker on how pranks led to prison
9 Oura ring: Wearable device that tracks activity and vital statistics
10 Irish Times Business Awards: Local Enterprise of the Year nominees
Real news has value SUBSCRIBE